With Mentally-Ill Husband And A Meagre Income, This Mother Struggles To Save Daughter From Heart Failure | Milaap
loans added to your basket
Total : 0
Pay Now

With Mentally-Ill Husband And A Meagre Income, This Mother Struggles To Save Daughter From Heart Failure

“My husband went to work regularly for the first two years after our marriage. We lived in a small hut, food and resources were scarce, but love was abundant. But he became more withdrawn as time passed by. He stopped talking, stopped going to work. I thought it was just a phase. But when starvation crept in, I knew that it was irreversible. It was also the time I found out I was pregnant. I started going to work to take care of my unborn baby – Kondammal became my life from then on. But now she is suffering from a deadly heart disease and there is nothing I can do to save her,”-Ramathayi, mother

‘For 13 years, I believed my daughter was healthy’

Being the only child at home, Kondammal was equally pampered by her mother and her maternal uncle who assumed the role of a caretaker after her father became ill. She only had to ask once for a new dress or candy; her mother would make sure that she got it, even if that meant she had to go to bed hungry that night. For Ramathayi, Kondammal is her sole reason for living. So when she was called to school a month back by her daughter’s class teacher, she did not expect it to be anything serious. “Kondammal is a little lazy in studies; she’s a below average student so I thought the teacher was calling me to talk about that. But to my shock, she told me that my daughter has a heart disease!” recalls Ramathayi, with tears in her eyes.

Kondammal was diagnosed with a heart condition in which there's an improper closure of the valve between the heart's upper and lower-left chambers – causing lower levels of oxygen circulation in the body. She needs an urgent open heart surgery to correct this, or her heart can even fail.

This poor mother, the sole breadwinner of her family, needs your help urgently

Ramathayi works as a daily wage laborer in Veerapatty, Tamil Nadu and earns a meagre Rs 120 a day. It is on this salary that she takes care of her mentally ill husband and their daughter Kondammal. She had pinned all her hopes on Kondammal – she wanted a good future for her only daughter, but as fate would have it, she is suffering from a severe heart disease that has stopped her from going to school now. “She suffers from fear more than breathlessness. She thinks she is going to die,” says Ramathayi.

With your kind contribution, Ramathayi can save her daughter 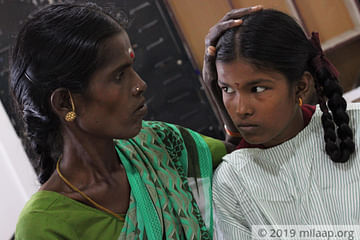 This 13-year-old often asks her mother if she will live beyond the next day. You can help her.

UPI: givetoramathayi@yesbankltd (Copy to clipboard)
Or
Click here to read the instructions before you make a bank transfer.