This Cab Driver's 7-Month-Old Son Gasps For Breath Every Single Day Due To A Large Hole In His Heart | Milaap
loans added to your basket
Total : 0
Pay Now

Shares
Shares
Share on whatsapp
Manisha is living in constant fear and trauma and each passing moment is a nightmare for her. Her newborn baby has been struggling to breathe normally. 7-month-old Kartik’s pain is due to a large and deadly hole in his heart which could prove to be fatal soon if he doesn’t undergo an urgent heart surgery. She fears losing her son even before he turns one.

Kartik is born with a heart disease

“It seems like he’s gasping for air with every single breath he takes. The crying just doesn’t stop, and by just looking at him I can tell that he’s crying in pain. He is suffering so much and he’s not even a year old.” –  Manisha, Kartik’s mother.

Just when Kartik was a month old, Manisha got him checked up because of his breathing issues. After the prescribed medicines had no effect, Manisha and her husband, Sharvesh were devastated in shock when they found out that their newborn was suffering from a severe birth defect of the heart.

Kartik's heart is at high risk of complete failure

A large hole in Kartik’s heart, also known as a ventricular septal defect (VSD), doesn’t allow his body to get enough oxygen, which is why he breathes rapidly for more oxygen. In no time, his heart will only get weaker and be at high risk of complete failure.

Kartik is underweight and susceptible to infections

Apart from feeling suffocated, Kartik also finds it very difficult to breastfeed. Due to this, he just weighs two-thirds of what an average 7-month-old baby should weigh, which is alarming.

“He throws up what I feed him almost every single day and is so thin. It’s so hot but he feels cold so easily. Even if there is some light wind going about, he gets scared, shrivels up and catches a cold.He keeps coughing continuously too. I just wish his surgery happens soon. I can’t see him in so much pain". – Manisha.

“We couldnt eat and we spend sleepless nights. We come from a small village and I have no one to turn for help. He hardly sleeps because he just can’t stop crying and can’t breathe. Since birth, my baby has barely smiled. There have been just a few days where he has played a little." – Manisha.

Only a heart surgery can save Kartik

Kartik cannot live long without a corrective heart surgery in the next few weeks. His father, Sharvesh, is a cab driver and earns just about Rs. 10,000 every month and provides for his 4-year-old son, Saurabh too.

Until now, Manisha and Sharvesh have begged and borrowed Rs. 57,000 to keep their baby alive but they’re in need of an additional Rs. 3 lakhs so that Kartik can undergo the surgery in time. If his surgery is delayed, his heart could collapse anytime.

Baby Kartik has a large hole in his heart which is causing him to suffocate and cry in pain since birth. The baby cannot survive long without a heart surgery but his family has absolutely nothing left to save him.Manisha and Sharvesh are running out of time and they need your help to save their son from such a dangerous birth defect.

Your contribution will help Baby Kartik to live a normal life. 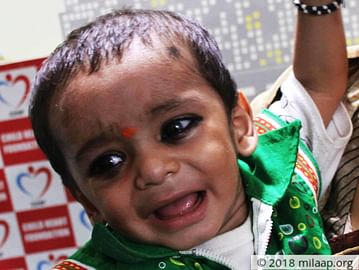 Kartik's Failing Heart Doesn't Even Allow Him To Smile

A large hole in Kartik's heart suffocates him every single day. This will get worse soon.

UPI: givetosharvesh@yesbankltd (Copy to clipboard)
Or
Click here to read the instructions before you make a bank transfer.