Daily Wagers Can't Save Their 5-Year-Old From Aggressive Blood Cancer That Will Quickly Spread Without Treatment | Milaap
loans added to your basket
Total : 0
Pay Now

“Every night, I tell him one of his favourite stories in the hope that at least for those few minutes, he forgets about the excruciating pain he’s in. I tell him about a boy who climbs a hill after everyone tells him he can’t, and he says “amma one day even I will be like him.” But it’s been one month since our Jotu has been laying on this hospital bed, weak and helpless because of cancer. He doesn’t have long without treatment.” – Saraswathi, Jotyippa’s mother.

Little Jotyippa’s greatest fear is that he will be poked with needles every day, for the rest of his life. Every time he sees a nurse walking towards his bed, he grabs his mother’s arm and cries. Saraswathi tries her best to comfort her son, but Jotyippa continues to tremble. While Jotyippa fears needles, Saraswathi and Balu fear losing him to blood cancer every day. They're desperate to save him before it's too late.

Jotyippa’s childhood is lost and his future, uncertain because of deadly cancer

Jotyippa’s is the happiest when he’s in the arms of his mother or grandmother, listening to the many tales of people, animals and history. Like many of the characters in their stories, Jotyippa also wished to climb big mountains and win races. But now, all Jotyippa wishes for is to go back home, away from all the pain and misery.


“It all started a month ago when he came home from school complaining of chest pain. There was a slight swelling, but medicines didn’t make it go away. We took him to a bigger hospital, all the way unaware that it could be something serious. We’re very poor and uneducated. When the doctors told us it was cancer, we didn't know what treatment he would need. All we knew is that cancer kills."

Jotyippa has lymphoblastic lymphoma, a fast-growing, aggressive cancer that develops when the white cells become abnormal and grow in an uncontrolled way. The only way Jotyippa will survive this is with chemotherapy for the next 6 months.

His parents have mortgaged their house to start treatment, and have no way to continue chemotherapy

Saraswathi, Balu and their three children live in a small house in Raigad district, Maharashtra. All five of them huddle up on the floor of their house every night to sleep. Saraswathi and Balu are daily wage labourer’s who work on the fields to remove weeds. Balu earns Rs. 100 a day, while Saraswathi earns Rs. 50. Their income wasn’t enough to even start his treatment, let alone sustain it for the next 6 months.


“We knew we had to start treatment immediately. So we mortgaged our house and got a loan of 1 lakh to start chemotherapy. Now we need 12 lakhs to ensure that his treatment is continued. We barely have anything left now, we will never be able to afford his treatment and our son is running out of time without it."

Jotyippa’s cancer is aggressive and fast-growing. Without continued chemotherapy for the next 6 months, he won’t make it. Saraswathi hasn’t been able to work in a month now because of her son’s treatment, while Balu is struggling to find work. They’re left with no other way to save their youngest son and plead for your help.

Your support will save little Jotyippa’s life. 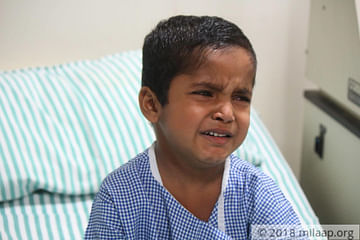 Jotyippa needs chemotherapy to survive cancer. You support will save his life.

UPI: givetobalu@yesbankltd (Copy to clipboard)
Or
Click here to read the instructions before you make a bank transfer.