12-Year-Old With Cancer Who Cannot Recognize His Own Mother Due To Memory Loss Needs Urgent Help | Milaap
loans added to your basket
Total : 0
Pay Now

"Right from the day we learnt he had cancer, we have been trying all that is possible to save him. We literally lost everything we had, we sold the only piece of land we had, exhausted all the savings, and even skipped our meals. While we were struggling to continue the treatment, he got violent seizures and it affected his brain. When he opened his eyes, he looked at me blankly, with no flicker of recognition. I became a stranger to my own son within a matter of minutes. I can't lose him at any cost, but I have already given away everything and have nothing left." - Butti Devi, Mother of 12-year-old Ijamul Mondal.

Ijamul suddenly fell sick and not even in their wildest dreams, his parents thought it would be cancer

Duttidevi lives in a village in West Bengal with his five children and her husband, Thamsul, a fruit seller, works in Kolkata. Dutti managed to run her family with whatever little money that he sends. She made sure her children are fed properly. 8 months back their lives came to a stand still with the diagnosis of Ijamul's cancer. Butti was devastated beyond words, but she gathered all her strength and started the treatment immediately.


"I thought it was just a normal fever. I took him to hospital when it did not subside even after 2 weeks. Blood test and scans confirmed it was cancer and doctors told it'll spread quickly. I was asked to take him to a hospital in Bangalore where they provide treatment at lower costs. When I informed my husband over phone he broke into tears, there are no words to express our helplessness but I had no other choice to take him all alone to Bangalore. We cant even have our food if my husband doesn't work, how can we give him treatment if he also comes with us? I was hopeful that he would be cured soon but everyday it became worse." - Butti.

Dutti left her other children in the care of her relatives and came to Bangalore. By the time they reached, Ijamul's condition became worse. The cancer he suffers from called Acute Lymphoblastic Leukemia has the potential to spread rapidly from the bone marrow to the blood. Doctors said only a bone marrow transplant can save his life. Transplant was beyond her means , yet she did not give up. Butti promised her son that she would take him back home only after he is completely recovered.


"We sold the only piece of ancestral land we owned as we had only one thought - to save him. We applied for CM medical funds too. We still have unpaid bills, but seeing his condition and my distress, doctors agreed to do an urgent transplant for him. I thought with that all our sorrows had come to an end. But it was only a beginning. I continue to struggle in this strange city, with no one to even console me. I can't even speak in the language people speak here. I cry all the time in silence." - Dutti.

Ijamul recently suffered from violent seizures that caused memory loss, wiping away all his mother's hopes of taking him back home

Doctors recommended chemotherapy after the transplant to recover completely. He was responding well, when Dutti was hopeful of taking him back home, the most unexpected happened. Ijamul got violent seizures that led to memory loss. Poor Ijamul 's memory is not stable and he often forgets everything. He is now treated for the seizures and he also needs chemotherapy followed by radiotherapy to fight back cancer.


"I don't know what we did to deserve this. My other children and my husband are crying everyday, they keep asking about him. I have no strength to tell them that he doesn't remember them. My husband is sending every rupee he earns for his treatment but that is nowhere close to the cost of the treatment. I don't know how long we can continue like this. I can't imagine going back to my home without him. I promised my son to save him at any cost. He may not remember it now but I can't fail him. I won't let him die. I don't know what I can do to save him." - Dutti.

12-year-old Ijamul , once an active and cheerful boy is now battling cancer and has lost his memory and he can hardly recognize his mother. His mother Dutti has come all alone from Kolkata to Bangalore for his treatment. She is struggling all alone to save him. His father, a poor fruit seller is helpless and now he has no one to turn for help. They need Rs 2 lakh for his treatment. Only your support can save Ijamul and his family to escape this pain and trauma. 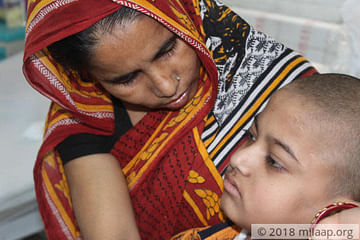 He needs chemotherapy followed by radiotherapy. His parents are struggling to save him.