Mother Can't Save Her 3-Year-Old Whose Heart Will Fail Without Urgent Surgery | Milaap
loans added to your basket
Total : 0
Pay Now

When I see Gunjan in so much pain, I end up breaking down in front of her. My anxiety and fear for Gunjan often results in uncontrollable seizures in my hands and legs and I faint. She is just 3-years-old and she gets scared when she sees me like this. I feel guilty that I am not being able to take care of my daughter. " - Sushan Darji, Gunjan’s mother.

3-year-old Gunjan has a congenital heart disease that causes oxygen-poor blood to flow to the rest of the body, creating serious breathing troubles for this little child. The doctors have told Gunjan’s parents that the only treatment for this is an open heart surgery in a few weeks. But her mother's poor health and the family's financial condition are obstacles in getting little Gunjan getting treated at the earliest.

Gopal and Sushan Darji got to know about Gunjan’s ailment when she was 1-month-old. The heart disease is called the Tetralogy of Fallot. It is mostly a combination of four heart defects that changes the normal flow of blood through the heart. It causes oxygen-poor blood to flow out of the heart and to the rest of the body.

They had taken her to several doctors hoping that their daughter’s problem would get better with time and medication. But that was not going to happen.

“We kept on hoping that one of the doctors would say that Gunjan would become healthier and lead a normal life. She is just 3-years-old, you know, and she has her entire life in front of her. I can’t even imagine that a child as small as she can have a heart disease” - Gopal.

Gunjan gets tired easily and her lips turn blue

“She loves playing with her dolls, singing rhymes and drawing with crayons but the worst thing is that she can’t stay up for more than 2 minutes. She gets very tired and eventually wants to sleep,” - Sushan.

The condition of her heart is so bad that even a little exertion from her side leaves her drained. Her lips, tongue, nails and the area beneath the eyes turn blue as her defect in the heart doesn’t allow oxygen-rich blood to reach her organs. Even when she is in pain she can’t cry for long, crying makes her tired too.

Gunjan’s elder brother Soham is 12-years-old and goes to school. Gunjan, too, wants to join her brother in school and her parents have a hard time trying to make her understand why she can’t have a life like other kids.

“She looks longingly at Soham’s school bags, water bottles, and her eyes well up with tears when she sees him leaving for school in the bus. The moment he is back, she picks up the bag and pretends to go to school. We don’t have the heart to tell her that she might not be in a condition to go to school anytime soon,” - Gopal.

Gunjan is too young to understand what is going on with her. She takes her medicines when she is being told to but doesn’t know the details of her ailment.

“Some of the days it is too difficult to take her to the hospital, she cries so hard. Then we tell her that we would take to her favourite amusement park and only then does she agree to come to the hospital,” - Gopal.

Gopal and Sushan have not had a single day of rest since they have learned about Gunjan’s ailment. Gopal goes to work but he can hardly concentrate on work. All the time he is worried about his family especially Gunjan. This constant worry and tension have resulted in him having diabetes.

“I work in a small private firm and my salary is not enough to cover the costs of surgery. I have to take care of Soham’s school fees, books, and Sushan’s thyroid medicines. My son keeps on asking me how we can save Gunjan. I don’t have anything convincing to tell him. I feel so helpless” - Gopal.

3-year-old Gunjan has a rare heart disease and the only way she can get better is by getting an open heart surgery. Desperate as they are to save their daughter, these poor parents do not have the fund to go forward with the surgery. The risk is so high that if the surgery is not carried out in a few weeks, Gopal and Sushan will lose their little daughter. Only your kind contribution can help little Gunjan live a healthy and normal life.

Your support can save Gunjan 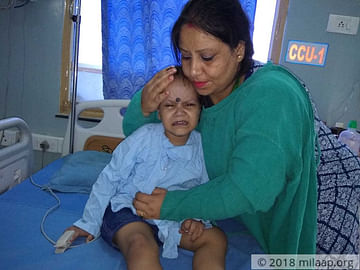 Gunjan needs surgery in few weeks and her parents can't afford it.