M
You are sending a message to
Mythili
Go back

"One day, on his way to work, a cow on the street came running at uncontrollable speed, knocking him unconscious. He had severe injuries on his face and eyes. The next day, he woke up screaming in pain saying he feels like his eyes are burning. We gave him hot water massage thinking his swelling would subside but when he opened his eyes, his vision in the left eye was blurred. He is given injections to reduce the swelling, but there are times he can't even open his eyes. Doctors said that without a surgery his left eye will be disfigured and he'll lose his eyesight forever. - Shekar, Father of 23-year-old Gokul.

23-year-old Gokul, a young boy who aspired to become an Engineer was forced to drop his studies after his father had a heart attack. His mother Yellamal stayed at home to look after his father. Gokul worked in a small shop as an assistant and supported his family. The day he got admitted in hospital, their lives had come to stand still. All these days, Gokul was supporting the family, now his parents feel completely lost.


"His jaw was dislocated and he was bleeding profusely from his forehead. He underwent an urgent surgery for jaw dislocation three months back. Since then, he is able to take only liquid food. Even before he could recover from the surgery, the swelling in his eyes became severe. I can't bear to see him suffering like this. I don't understand how fate can be so cruel." - Yellamal, Mother.

Gokul felt irritation and pain in his left eye ever since the  accident but he did imagine anything serious. He never knew a harmless swelling would turn so critical like this. He knew something is wrong when the swelling turned out to be an abnormal protrusion that refused to go away. He was terrified when his  vision was blurred in his left eye. Nothing could ease his pain. He was diagnosed with Left Side Type A Post Traumatic CCF, meaning his blood vessels are blocked thus cutting off blood flow to his eyes. He needs an urgent surgery to treat the abnormal blood vessels.


Gokul with his parents before the diagnosis of this dreadful condition

"He is not able to do anything on his own for the past 2 months. He is not able to even sleep properly. Injections only help to reduce the size of the selling but it grows again in a day or two. He pleads to do something to ease his pain, all I can do is to walk away from the room, not having the strength to see him suffering. Doctors have told surgery is the only option but I cannot afford it." - Yellamal.

Shekhar, a heart patient is taking medicines regularly, he has severe breathing trouble. After Gokul was admitted in hospital, poor Yellamal started to do odd jobs for a meager amount of Rs 150 per day. She doesn't get jobs all the days. They are struggling even for their next meal and cannot afford even for medicines.


"I stopped buying medicines for my heart problem and all I can save is Rs 600 but we need 5 lakhs for the surgery. I'm prepared for anything but I can't bear if my son loses his eyesight. He deserves a happy life. He has been through so many hardships in his life. My wife is struggling to find some work and she can bring home is few hundreds. All our relatives and his friends have helped us so far we can't ask them more. I don't know what I can do to save him." - Shekar.

23-year-old Gokul is at the verge of losing his eyesight completely. He needs an urgent surgery to treat the abnormal blood vessels which is blocking the blood flow to his eyes. He is in unbearable pain and his vision is blurred now. Gokul was the sole breadwinner of his family, but now with no source of income, his family is struggling every moment. They are desperately waiting for  a help. With your support, Gokul can get the surgery done and live a normal life.

Your kind contribution will help 23-year old Gokul from losing his eyesight
Supporting documentThe specifics of this case have been verified by the medical team at the concerned hospital. For any clarification on the treatment or associated costs, contact the campaign organizer or the medical team. 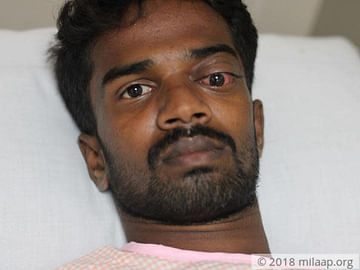 He is the sole breadwinner of his family and his poor parents cannot afford the surgery.