This 54-Year-Old Has Given A New Home To Abandoned Old Souls | Milaap
loans added to your basket
Total : 0
Pay Now

Shares
Shares
Share on whatsapp
Young Nagaraj was a mere boy when his father passed away. His mother struggled to raise him and his siblings all by herself, working herself to the bone, but she never ever let them down. She wanted to give her children a good life, a life better than the one she had, and it was her struggle and selflessness that shaped Nagaraj into the man he is today. Even while growing up Nagaraj was kind, helping his friends and fellow men however and whenever he could. This trait followed him through his teenage years, through his first job, through his marriage. Anyone who knew Nagaraj knew they could count on him in times of need.

It was six years ago when Nagaraj witnessed something that changed his life, and consequently – hundreds more. He saw a couple of weak-seeming old people washing dishes by the side of the road. He waited and watched but it didn’t appear like they had any other family. It reminded him so much of his own helpless mother, and he was so moved by their plight, that he decided then and there that he would do something to help them and those like them as much as he could. And thus was born his Maatrubhumi Uchita Vruddashrama Project: an old-age Home that you didn’t need money to get into.

His project started with just two people. He fed them, took care of them, brought them back to good health. Soon two became five, and that became eight. Once other people in their twilight years, who had been abandoned by their family or lost them to disease or tragedy, found out about Nagaraj’s free old-age home where they got warm food, a clean bed, and a heart full of love, they flocked to his incredible sanctuary. Three years into running the home, he was featured on a regional TV news channel, spreading his fame farther. People came in droves from other districts as well, and Nagaraj became a local legend, affectionately titled “Naganna” by his well-wishers. His Home, or “Ashram”, currently houses 58 abandoned souls, some of them old, and some of them challenged either mentally or physically or both.

Naganna takes responsibility and care of the Ashram and its inhabitants very seriously. Whenever anyone shows up at their doorstep seeking refuge, he gets them a free health check-up before anything else. This is as helpful to them as it is to the existing members of the Home, preventing needless spread of diseases, as most of the people who come seeking help have lived in very unhygienic conditions. After the initial check-up, he even gets them a more thorough examination if necessary, so he can know if they need any kind of regular medication. He also regularly gives all the inhabitants free haircuts and shaves, and new clothes. He maintains clean and regularly replenished toilets and has everyone’s laundry cleaned regularly as well.

Despite the grand scope of his project, Naganna funds it all from his own pocket. He’s no millionaire, and he doesn’t have grant money flowing to him from every direction. He’s just an average government worker. But whatever money he earns, goes almost entirely into the Ashram’s upkeep: namely the monthly rent and electricity bill for the space, the monthly ration expenses for all the inhabitants, their healthcare, etc.

On such a tight budget, Naganna cannot afford to have any staff… so he and his entire family run the place together. Indeed, his wife, son and daughter not only accept Naganna’s social conscience, they feel it themselves. No task is too menial for them as they feed, clean, and take care of the Ashram’s residents with their own two hands. All the residents are truly made to feel like they’re living with their family, who loves them and is willing to show that love through their actions.


But this paradise for the old and weary may soon have to close its golden gates.

Naganna has recently received an eviction notice from his landlord, who cited personal reasons for wanting the building back. If Naganna doesn’t comply soon, fifty-eight old and unfortunate souls will be thrown to the streets for the second time in their lives. To keep them off the streets and in a place that is stable and permanent, a place the residents can proudly call their own, Naganna wants to buy a piece of land and build them their own home. They would never have to worry about being kicked out by someone again.

Despite all he has accomplished, this is one task that is beyond Naganna’s abilities to complete by himself. And so he seeks the support of other kind souls who agree with his philosophy, and asks them to help in any way they can.
If you've ever had a grandma or grandpa, or if you are one yourself, consider: are old people to be discarded just because they're weak and feeble? Or is it our collective responsibility to show them our love, respect and gratitude by taking care of them in their time of greatest need?

If you agree with the latter, then please donate to Naganna's cause, however much you can. You would be helping give a home to not just the existing 58 residents, but also all the ones who come to the Ashram in the future.
Donate 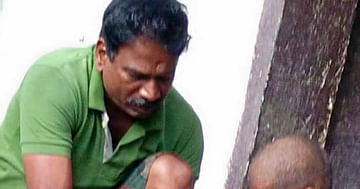 He wants to build them their own house, but the cost is beyond his means