This Teenager's Life Has Been Brought To A Standstill By Cancer, Needs Timely Treatment To Survive | Milaap
loans added to your basket
Total : 0
Pay Now

This Teenager's Life Has Been Brought To A Standstill By Cancer, Needs Timely Treatment To Survive

“Chintesh looks outside longingly at his friends as they scream and shout and enjoy playing cricket during their winter holidays. He sits by the window the entire morning, watching them play and sometimes, he says, ‘My leg spin is better than Rajesh’s, he is not doing it right.’ The very next instant he looks at his legs, covered by blankets and gets upset. He is reminded of the fact that he hasn’t been able to walk on his own for the last six months - playing cricket is a far-fetched dream for him. The sadness in his eyes breaks my heart; I feel so helpless thinking that I am unable to anything to save my son from cancer,” - Mantu Rajwar, father.

It was during the month of June that Mantu got to know about his 16-year-old son’s bone cancer. Chintesh had been complaining of pain in his left leg. Mantu and his wife, Meera had no idea that this could be a symptom of something as dangerous as cancer. Chintesh has been diagnosed with Ewing’s Sarcoma, a rare type of cancer that occurs in bones or in the soft tissue around the bones. The doctors have told Mantu that the only way his son can get better is through continued chemotherapy.

“Chintesh is unable to walk on his own - he needs our help to even get down from the bed and go to the bathroom. He has lost so much of weight. I look at him and search for the energetic boy who always had a smile on his face but he is nowhere to be found. These days he keeps to himself and doesn’t talk to us at all.”

Mantu is a daily wager who earns only Rs 200 per day. He is the sole breadwinner for his family of five. When the medicines from the local doctor didn’t give Chintesh any respite, Mantu begged for help from his entire village. To his utter relief, every one of them contributed as per their capability and Mantu was able to take his son to the city for better treatment.

“The Rs 70,000 I got from the villagers got over soon and now I need another Rs 4.5 lakhs to continue Chintesh’s treatment. But without help I would never be able to arrange for so much money.”

Chintesh is fighting cancer and is in urgent need of timely treatment. But Mantu and Meera are helpless and they don’t know how to save their son without help. Your generous contribution can bring back hope for Chintesh as well as his parents.

Together, we can help Chintesh fight cancer 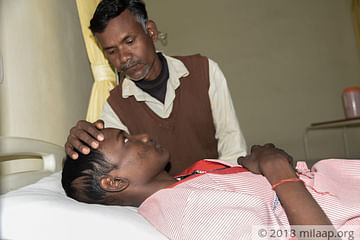