This Father Who Irons Clothes For A Living Watches Helplessly As His 1-Year-Old Battles Cancer | Milaap
loans added to your basket
Total : 0
Pay Now

PC
You are sending a message to
Piyush Choyal
Go back

Shares
Shares
Share on whatsapp
For Srinivas, a hardworking family man from a humble background, the biggest concern is ensuring that his family has food on their plate. His daily struggles were tough enough, and thinking about the future or saving for it wasn’t a luxury he ever had. Cancer was unheard of in his family, and even when his aged mother spoke about a distant relative suffering from the disease, it was always about someone much older. Srinivas never thought that his only child, all of 1-year-old, would one day be diagnosed with cancer even before she said her first words.

With the chills in the air and the common cold doing the rounds, they weren't too worried when she fell sick

The weather in Bengaluru has been rather cold, sometimes dipping as low as 11 degrees. Children and elders alike made sure to step out with a sweater at hand – everyone had a cold. So it was nothing out of the ordinary when baby Sharavri got a cold mid-December. Ranjitha and Srinivas weren’t worried until she started struggling to breathe.

“We thought it was a common cold, everyone around us was falling sick, and until 10 days ago, we didn’t know it was blood cancer.” – Srinivas, father

Once her disease was diagnosed, they were asked to start her treatment immediately – she needs 6 months of chemotherapy to fight the disease. Unfortunately, Srinivas hasn’t yet found a way to afford his daughter’s treatment, and she needs it at the earliest.


“She cries a lot now. Every time we put her on the hospital bed, she’s so scared. She gets poked with so many needles, it’s so painful to watch, I can't even imagine what she's going through. Every parent wants to give their child the best of everything. I can’t buy the best of toys or clothes for my baby, but I did as much as I could. Now I only feel a sense of helplessness.” - Srinivas

Srinivas is the sole breadwinner of the family. He irons clothes for a living in the basement of an apartment building and sometimes manages to earn Rs. 400 in a day. Those are the good days. However, there are days he doesn’t make enough. He owned a small piece of land which he had to sell for his ailing parents’ treatment – both are diabetic and as a result, are experiencing many complications. After everything they’ve been through in the past year, financially, Srinivas and Ranjitha have nothing left to afford baby Sharvari’s cancer treatment.

“I met with a bike accident a couple of years ago, and ever since then, I haven’t been able to work long hours because I injured my right hand. It’s difficult, but I will work all day and night for my baby.” - Srinivas

However, no matter what Srinivas does, it isn’t enough to afford the 7 lakhs needed for his baby’s treatment. Baby Sharvari can fight the disease with your help, and can finally have a pain-free childhood.

These parents need your help to save their only child from cancer. 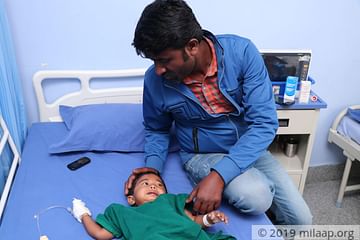 Baby Sharvari Can Win Her Fight Against Cancer With Your Help

Baby Sharvari needs chemotherapy to fight cancer and go back home healthy. You can help save her.