LS
You are sending a message to
Laxman Singh
Go back

Aravind has interleukin 12 deficiency in his blood which has wrecked his immune system. He is too weakened to go to school or have any friends because he has tuberculosis and chronic throat infections and fevers. He needs a bone marrow transplant at the soonest, so he can join school and begin an education before his crucial learning years are past.

Not a day when he was not ill

Since he was born, Laxman recalls Aravind as a weak child. He had a recurring cough and suffered from a fever that just would not go away. And it just got worse over the years.

His concerned parents have rushed the child to various hospitals, got him checked by various doctors. However, there has been no diagnosis. They have been to places like Cooch Behar and Siliguri to get him checked by doctors there, but to no avail. Temporary medication provided only so much relief. Desperate, the parents have tried Ayurvedic alternatives in Haridwar, but in vain. Little Aravind continued to be ill.

The test results revealed that little Aravind was suffering  from interleukin 12 deficiency. Interleukin 12 helps in cellular immune responses to pathogens. A deficiency indicates a high risk of infections. To add to his ailments, Aravind also suffers from recurring tuberculosis.

The only chance of Aravind recovering is with a stem cell  transplant. A German donor for Aravind has been found. However, there is a massive obstacle standing in the way of Aravind's treatment – finances.

A life of poverty

His father, Laxman Singh blinks at his unfamiliar surroundings. The clinically sterile surroundings in the hospital seem to disorient him. He isn't used to spending so much time in a hospital. However, now, he has no choice. He has to constantly accompany his 8 year old son, Aravind.

Laxman has only known poverty all his life. Hailing from Guwahati, Assam, Laxman and his wife are illiterate. “She can't count after 26”, says Laxman. With his wife as a housewife, Laxman is the sole breadwinner  of the family. He does not have a permanent job. He ekes out a living for himself and his family by doing a number of odd jobs. “Over the years, I've lost count of the number of jobs I've held”, says Laxman, “I've  grazed cows for  the meagre sum of Rs. 50 a day. I've also worked as a  peon in a school, where I  earned Rs. 150 to ring the school bell.” After years of doing menial work, he started working in construction, where his job was to provide material for building roads. Working as a middleman, he thrived on commission.

Laxman's family includes him, his wife, and their 5 children. At 8 years of age and born twenty years after his parents' marriage, Aravind is the youngest. And he is also the one who has suffered the most.

Laxman and his wife require Rs. 30 lakhs for their son's treatment. This is an amount they can't even think of being able to afford. Too  weak to attend classes and with constant trips to Chennai, Aravind has dropped  out of school. “I dropped out of school after the second standard”, says Laxman, sadly, “And the same thing is happening to my son.” The older daughters are studying in government schools. The future looks bleak for Laxman and his family. You can change that. 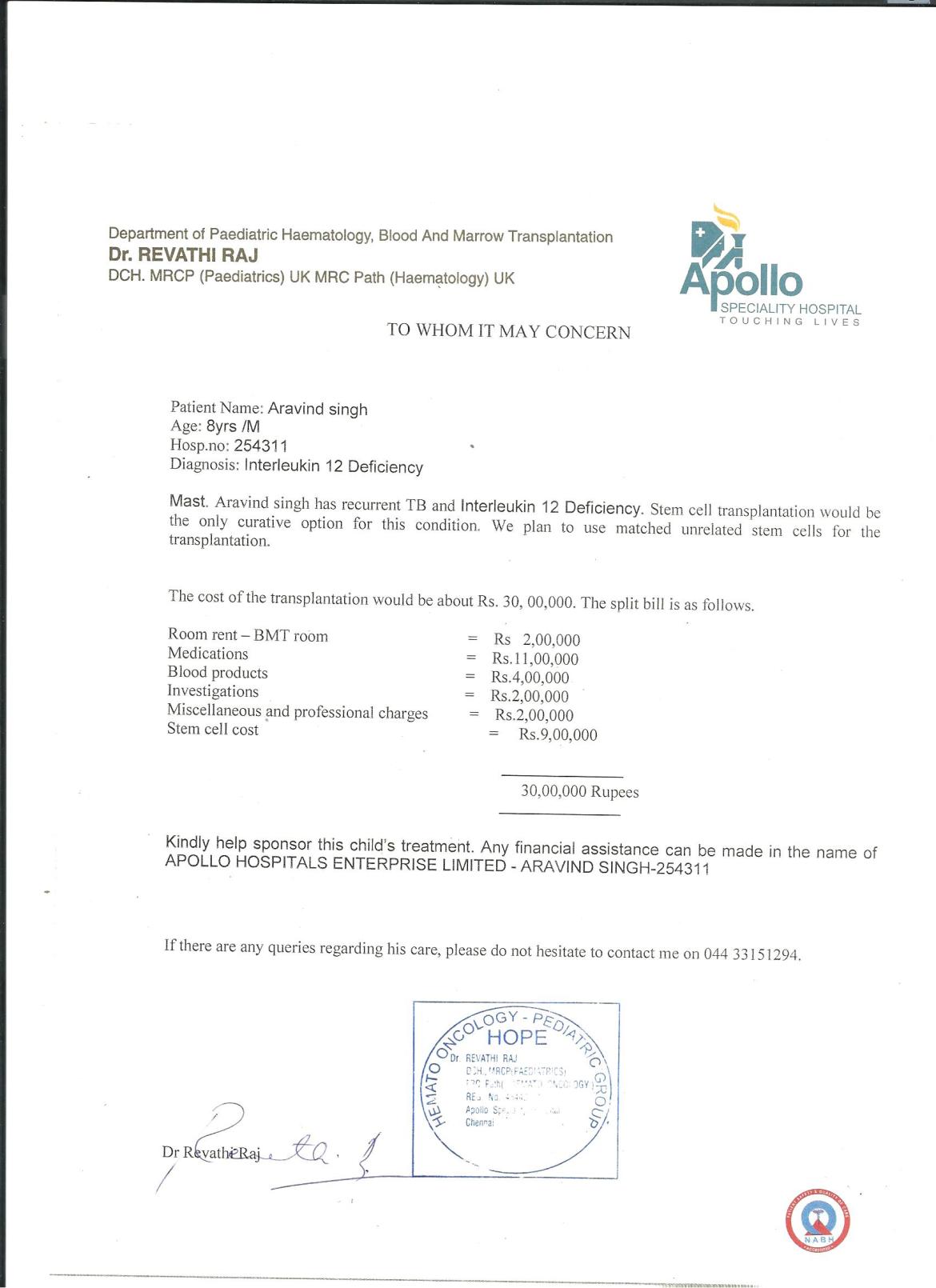 You can help Aravind receive the stem cell transplant he desperately requires. Contribute now and help the little boy live a life he has never known before – a life free of illness.

Click here to learn how you can help Aravind

Aravind has been sick since he was born

With your help, he can receive the treatment he urgently requires.