An Accidental Fire While Playing In The Balcony Has Left 50% Of This 6-Year-Old’s Face And Body Burnt | Milaap
loans added to your basket
Total : 0
Pay Now

“Just a few minutes after he went to the balcony, I heard a sound as loud as blast. When I rushed to the balcony, I saw his little body on fire. I panicked and rushed to put out the fire, he was already unconscious by then. I wish I had not asked him to go outside and play that day, I wish he had stayed inside, safe and sound.”

Acamas is the only child of Shanti and Lazarus. Like any other day, while the family was engrossed in their daily routine, suddenly their world fell apart when Acamas caught on fire. The meter box on the above floor had burst and the fire came down on the ground floor where the 6-year-old was playing. The fireball crashed the entire wall and then hit the little boy.

“My husband, Lazarus was at work as usual. When I saw my son burning, I somehow managed to take him out to the open place outside our home. There were so many people, but no one came forward to help me put out the fire or even call an ambulance."

With 50% of his body burnt, Acamas can't even move anymore

After much struggle when Shanti could finally take her only son to the hospital, he was taken to the ICU immediately. His entire body till his thighs, including his face, has been brutally burnt. He has a burn of 50-60% with a penetration of 20% inside the skin.

“Acamas is our only child and he is all that I live for. I have tried to keep him away from any kind of pain. Even if he has a minor fever, it scares me. Right now, he is lying in the hospital bed, unable to even change sides. He can’t even take the liquid food. He tries to talk, but his voice is choked."

The little boy is undergoing treatment and dressings every day. He is in a high risk of getting infected if he is under any less care. The parents might not even be able to save her if they take him back home.

“My wife was the one who brought our son to the hospital in her lap. She holds herself responsible for whatever happened to Acamas. Our son’s face is barely recognizable now. She can barely gather the strength to go and see him in the ICU. She is in a state of complete shock and I am scared that she will never be able to recover.” - Lazarus

Lazarus works as a salesperson and earns around Rs 20,000 a month. He always thought that if not living luxuriously, his family will at least not end up begging or borrowing. While the owner of the house had promised to pay for the expenses, he has refused to spend any further. He has already spent more than what he earns in a year in just 10 days. His workplace is trying to help him, but everything is uncertain.

“In the blink of an eye, our little boy fell prey to such a cruel fate. All I want now is to take him back home. It’s difficult to look at the condition he is in. All of this happened without a fault of his. I want to make things right. I don’t know how will I save him, but all I know is that I have to save him.” - Lazarus

6-year-old Acamas is fighting for his life in the hospital after he got a 50-60% burn as the meter box in his home caught fire. His father has to arrange another Rs 10 lakh to save his son from succumbing to the burns. Acamas needs to stay in the PICU longer to completely recover from this tragedy. It's his only chance.

Your support can help this 6-year-old live. 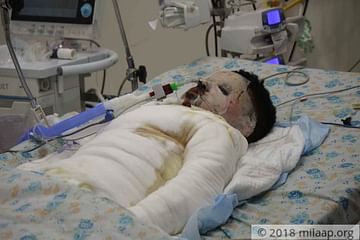 In Just A Few Minutes, This 6-Year-Old's Entire Body Caught On Fire

Acamas needs to stay in the PICU to survive the tragic accident.