Sunitaben's savings have grown by 5 times in 2 months | Milaap

Sunitaben's savings have grown by 5 times in 2 months

As I walked down the narrow alleys in Gandhidham, a small town in Kutch, Gujarat, in western India, I realized how the number of people from the surrounding neighborhood accompanying me and the unit branch manager had increased in number, considering they all wanted to help us with the directions. Another major point of interest was that they were all intrigued, and they wanted to know my reason of visit to their neighborhood. Upon finally reaching the house of Milaap borrower’s house, one of them excitedly said that this was Sunitaben’s house!

I was here in this branch of Kutch in order to check on the progress of Devipujak Mahila Mandal, a group being led by Reshamben, after they had borrowed a loan in order to develop their respective enterprises. But as she was too occupied with work that day, I met Sunitaben instead, one of the other group members.

Sunitaben, a 35-year-old woman, has been running the business of selling vegetables since eight years now. With her loan from Milaap a couple of months before my visit, she was able to buy a lot of stock in bulk. She clearly stated that the loan had impacted her life in a much bigger way. Not only did it help increase her monthly income, but now, she is successfully able to fund for the education of four of her children.

She earns a sum of Rs. 400-500 per day. Out of which she is able to save Rs. 100-200 on a daily basis. This is highly remarkable. The change is clearly apparent. Because the amount she is able to save is almost five times more than what she could earlier. This change in Sunitaben’s life has only been possible due to the support from Milaap’s community of lenders like you. And she, with all her heart, feels thankful for it. 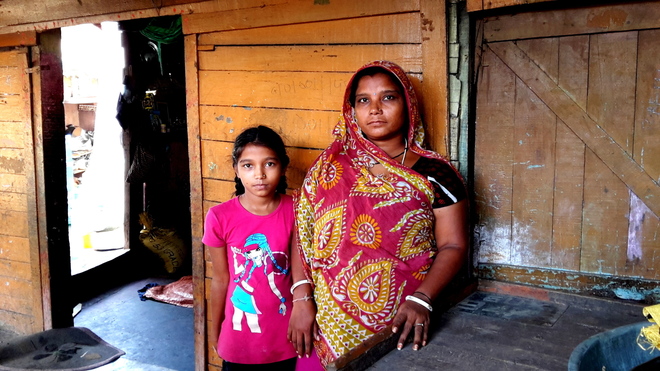 Sunitaben along with one of her daughters