Auto Driver Sold His Auto And Still Cannot Afford To Save His 8-year-old Son From Heart Disease | Milaap
loans added to your basket
Total : 0
Pay Now

"There was 1 in 100 chance for my son's heart problem to recur and unfortunately, my son is that one child who has to suffer through this pain again. Sreejith an open heart surgery when he was just 3 years old because he had 2 holes in his heart and a problem with his valve. We thought the worst was over never realizing that fate had other plans for us." - Varadarajan, father.

Sreejith suffers from a critical heart disease, the blood flow from his right ventricle is blocked

8-year-old Sreejith is an active and a very happy child. People fall for his innocent smile and he spreads positivity everywhere. His energy and smile are gradually diminishing because of the severity of his problem. He complains of severe leg pain because of which he hardly eats and sleeps. There is a blockage of blood flow from his right ventricle because the muscle under the valve area is thickened. This leads to fluid retention and swelling frequently. When the pressure goes high, it could kill him.

"When he was born, his belly was so bloated. They drained a lot of fluid but he fell sick. The doctor asked us to bring him back after the fever subsides. Within a week's time, my wife and I met with an accident and she broke her hip. It took few months for us to recover. By that time his fever was gone and he seemed healthy. So we did not take him to hospital. When he turned 3, he had a raging fever. We rushed him to the hospital only to be scolded by the doctor for not bringing him then. We learned that our son has a terrible heart problem and it could take his life."

Sreejith had his open heart surgery when he was 3. The hole in his heart was closed and doctors said that valve has been repaired and he is perfect now. Doctors warned about the possibility of recurrence of the disease but it happens only for 1 in 100. His parents Varadarajan and Rani thought that fate won't be cruel again and their worse days have come to an end. Sreejith was growing as a normal child with no complications but his life took a drastic turn within few years of his surgery.

"He suddenly fell sick and he had a high fever. He has never complained of being tired but of late he does not get up from the bed and he does not go out to play. Every day he had different complaints. We were terrified when he fainted. His heart beat was rapid, my nightmares became true when the doctor said that he needed another surgery to save his life from the heart disease." - Rani, mother.

Sreejith's father had a heart attack just 6 months ago

Varadarajan and Rani took him to several hospitals and them were told that his little body cannot bear a second open heart surgery and to take him back home. They were not willing to give up, they felt relieved when the doctors in Apollo said that he can be cured by stent procedure. A stent is a tiny tube that restores the flow of blood.

"I had a heart attack 6 months ago and I was almost close to death. My wife managed to borrow huge amount and saved my life. We already had loans to repay, we borrowed 2 lakhs for his first surgery. When I came back home, I had to start from scratch. Despite my health condition, I worked hard to keep my family going but I'm devasted to know that my son's life is at risk. I sold my auto, our only source of income. That is also not enough." - Varadarajan.

8-year-old Sreejith needs an urgent heart surgery to survive. His father, an auto driver had sold his auto yet he doesn't have enough funds to save his son. He now drives a rented auto for which he has to pay Rs 200 every day. He is not able to go to work regularly because of his son's treatment yet he is paying the rent for the auto every day. His debts keep increasing and his son's health condition is deteriorating day by day. He requires Rs 3 lakhs to save his son.

Your contribution can give Sreejith a chance to live his life! 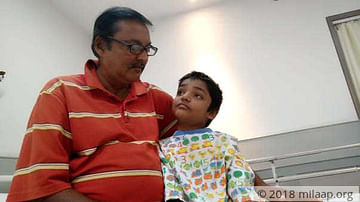 His father has no source of income now and he is struggling to save him.