Some Obvious Choices, Some Not So Obvious Decisions! | Milaap

Some Obvious Choices, Some Not So Obvious Decisions!

By Priyanka Suneja
13 April, 2016
Shares
Share on Whatsapp
There are millions of small stories happening in pockets of our country that foretell big changes! That's what I felt when I met Tanushree Singha, the 28-years-old girl who lives in Basirhat, West Bengal with her parents. The Singha family is blessed with two daughters, one of whom is married and lives in another town. The borrower Aarti Singha and her husband are in their late fifties and no longer have the drive to manage both the house and the family-owned business. In the absence of 'a son’, Tanushree has willingly taken up the responsibility of looking after her parents as well as efficiently running their business.

I met the family on one of my routine weekly visits to meet Milaap borrowers. When I entered the house and asked for Aarti Singha, we were met by Tanushree. A young girl with an assertive tone, was a sharp contrast from most women I had met so far. Her voice echoed confidence and her presence demanded respect, such was the aura of being around Tanushree.

The purpose of my visit involved getting an account of how her mother, the borrower, used funds disbursed to her. I began with simple questions, because I saw very hesitant answers from Aarti. I soon realised that her part in the decision-making was negligible. Tanushree took over, and patiently walked me through what they did with the money. The family owns a books and stationery distribution shop. The business was set up by her father and gave the family decent returns. He would go door-to-door selling stationery items to several shops and schools. They also own a small shop stocking their goods. “Both, me and my father manage the shop together. But he is aging now and needs more rest. It is my duty to manage the operations,” informed Tanushree.

Tanushree was very clear on the fact that the success of the business was up to her. She did not seem burdened with all the responsibility and she had not been forced into it. She has finished her Bachelors in Arts from Taki College, West Bengal and for her, that is the end of her responsibility towards herself.

Fascinated, I was asking her more about her educational aspirations when her mother interrupted me.
“Tell her to get married,” said Aarti and turned around to look at her daughter. Aarti’s eyes were filled with sadness for having an unmarried daughter at home. She began talking about the pain of not being able to convince her daughter to go away to ‘where she belonged’. It seemed like a much-discussed topic in the house.
Even as the mother talked about her desperate desire of getting Tanushree married, I saw that they depended on Tanushree for everything. The bathroom construction, the investments, the expansions -- the big and small concerns of the family, were all left for the daughter to take care of. Despite the comfort and support Tanushree gives her parents, it was unfortunate that it was returned with unpleasantness and melancholy.
Through it all, Tanushree remained stoic, very clear about her priorities and respectful of her parents. In this short meeting, through this small interaction, I could see Tanushree's strong, and charismatic personality. She was different from the others around her. But despite being so talented and wise, as a girl living in a small village in rural West Bengal, Tanushree struggles to be accepted by the society. The daughter of the family aims for nothing more than being her father's right hand in his business and the shoulder for her mother, to ease her domestic work. Yet, she has accepted the flat negation of her contribution at home by everyone around her.
Just before I left, Tanushree asked me about where I was from and how old I was. When I answered her question, she said, “You can do this because cities have so many more opportunities than here. I wish I did too.”

As I began walking out carrying the baggage of my thoughts, a man (a neighbour) walked up to me and began to chat.

Man : “She will never get married"
Me : “Why?"
Man : “She is too MAN-ly to be accepted by any one in the village."
Me: “But she has done so much for the family, doesn’t she command some respect in return?"
Man : “She works hard. But she can’t be ‘the married wife’. She will be a problem to the family where she goes."
Me :  "But what sort of problem? In fact, the fact that she knows so much about running a home and a business can be a precious asset to the family."
Man : "That's the problem, she will now demand respect and state opinions. No one needs that kind of  trouble in their life!"

There are always choices each one of us needs to make. A choice to take our life in a certain direction. But to do so, we need to navigate many social structures. Sometimes they inspire us to rise above, and do more and succeed. But some prevent us from achieving our true potential. Some of us are born in circumstances that let us disregard the expectations others have of us and not be punished for it. While others like Tanushree end up paying a price. Tanushree made her choice, and made it with pride and honour. Instead of respect for all that she has accomplished, she lives with the knowledge that she will never be accepted.

Everyone tends to think only of the helpless women as the ones that need to be saved. The stories of these women who don't give up get left behind. They too need support and encouragement. These unsung heroines need to not be criticised but be supported and appreciated for all that they do for what is important to them. It’s time to appreciate their courage and do what we can to make their life a little easier by accepting them for who they are. 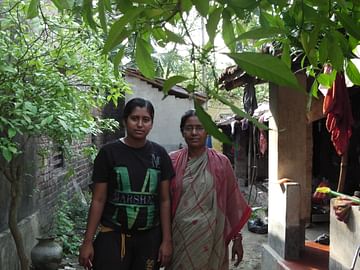 Brave enough to live her life her way!

Tanushree SIngha is a 28-years-old girl who lives with her parents in Basirhat. While she wants...

Donate View all Borrowers
OR