Help this 12-year-old get back to school by getting treated successfully | Milaap
loans added to your basket
Total : 0
Pay Now

Shares
Shares
Share on whatsapp
Priya is a housewife, who lives with her husband Jayabalan and daughter Sivaranjini, in a village 40 kms outside of Chennai city in TamilNadu. The 33-year-old mother has been doing everything she can to get help for 12-year-old Sivaranjani.

Sivaranjani,12 years old, has been diagnosed with Fanconi Anaemia, a disease passed down through families (inherited) that mainly affects the bone marrow. It results in decreased production of all types of blood cells.Fanconi anemia is different from Fanconi syndrome, a rare kidney disorder.

“3 months ago, Sivaranjini fell terribly ill, and had a high fever that did not reduce no matter how much we tried.  We were extremely worried. We then took her to the local government hospital. Here is where they said that her platelet count was 1800, which was very less. Usually it is supposed to be over 1 lakh,” said the 33-year-old mother of two, who also supports her older son studying in the 11th standard in Ambattur in Chennai. The constraint for money did not stop her and her husband’s ambitions of giving their children the best of the facilities.

“There are no good schools here, and we want him to have the very best of what we can afford.”

Jayabalan works as a security guard in a cargo port

Jayabalan, Priya’s husband works as a security guard in a cargo port called Sai Sakthi Enterprises located on the outskirts of Chennai. Before his job as a security guard, Jayabalan used to run a small but thriving tailoring business. However, one fateful day, while he was working, the lathe machine suddenly spun out of control, injuring his leg terribly. The injury made it very difficult for Jayabalan to walk or run, and finally forced him to quit the very business that he had made successful.
Jayabalan has been a security guard for three years now. “Ever since our daughter was diagnosed, he has been trying to cover as many shifts, often taking double, even triple shifts to make extra money. It is extremely difficult, but he does not give up, and he never will,” said Subhashini.

The disease hasn’t stopped Sivaranjani from attending school as regularly as possible. A class topper, the 12-year-old attends a government school that is 5 kms away from their house. Jayabalan would often takes Sivaranjani by bike. On days when he had to work double/triple shifts, Priya would find a way, by hitching a ride with anybody who was kind enough to take them to school.

"Nothing stopped her from going to school. Not the disease, lack of transport. Nothing," said Priya.

Priya and Jayabalan were asked by the local hospital doctor to move Sivaranjani to Egmore Devi Child Hospital, in Chennai, where she was admitted for 15 days. She was then referred to Apollo Hospitals, where she is presently receiving treatment for a bone marrow transplant.

A Bone Marrow Transplant is the way to go to cure Sivaranjani of this condition, that causes excessive bleeding, dark spots on skin and low platelet count.

"My daughter is amazing. She is positive, an outstanding student, and doesn't let these shortcomings get in the middle of her studies. Even now, during treatment, she finds ways to catch up with her classes. I am positive that she will get the help she needs," said the proud mother.

Click here to help Sivaranjini successfully complete her treatment so she can continue being a class topper and gain a bright future! 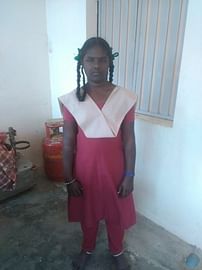 Sivaranjini doesn't allow the regular blood transfers treatment stop her from being the class topper. Your support can help her get the treatment she needs.