Sayraben’s tale of hardship and change

Dhrangadhra smelled of fresh and sweet air that morning. The signs of incessant rainfall from the day before were quite apparent. The previously dusty dry lanes seemed to have now developed vast puddles. I was being accompanied by one of my unit staff members from Prayas to the house of the Milaap borrower we were scheduled to meet. Walking seemed to be a difficult task, because the chances of slipping and landing right into the puddle were huge. I took careful steps while side-stepping the puddles, but unavoidably ended up splattering my feet with mud all over.

We were to meet a member of the Shitlama Mahila Mandal group, led by Jinnatben Salimbhai Sipai. They had borrowed an enterprise loan to develop and start their own small businesses. As always, inspired by the strength of these women, I was curious to know what today’s borrower would have to share.
Having reached our destination, we were welcomed by Sayraben Sipai, a woman in her thirties, into her house. A couple of months ago, she had taken a loan of Rs. 10,000 from Milaap in order to start her business of selling readymade garments. But she ended up utilizing the amount in buying a shuttle rickshaw, one used for transferring goods. Her husband, who used to drive passengers for a private company earlier, quit his job and started working for himself, driving the shuttle rickshaw. On being asked why she didn’t start a business of her own, Sayraben stated it as a matter of fact that her husband was able to earn more now by working on his own. His private job didn’t pay much and it was getting arduous, considering they were not able to meet the household expenses.
“We just constructed our own house and that took away all our savings. Both of my children’s educational requirements also need to be fulfilled, so it is just not simple,” she said.
But things have changed on a positive note for her. Her household income now tends to roughly be a sum of Rs. 11,000. Out of which, Rs. 5000 goes on the shuttle rickshaw, whereas the rest is sufficient for her to meet the expenses. I maintained my silence and patiently listened to her, trying to fathom her situation.
Sayraben, who is a mother of two children, a 13-year-old son and a 4-year-old daughter, wants to provide the best of education to them. At present, she herself works at a small institution which deals with packaging of spices. 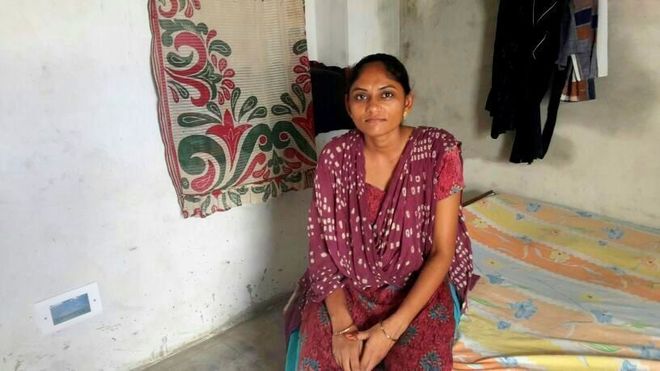 Sayraben in her newly constructed home