6-year-old Sharanya Is Vomiting Blood Because She Is Fighting A Very Grave Condition | Milaap
loans added to your basket
Total : 0
Pay Now

Shares
Shares
Share on whatsapp
6-year-old Sharanya has been fighting a terrible condition for the past year. The artery to her liver is blocked, causing regular bleeding in her stomach. She needs continuous treatment to stop the bleeding. With time, her condition is getting worse and she needs treatment if she is to survive. Her father is a plumber who is struggling to save her.

“Every time she vomits, our heart stops and we worry if we will lose her”

Sharanya's family lives in Pegadapalli, a small village 100 kms from Warangal. Her father Raju is a plumber who travels to the town daily looking for work. When he gets regular work, he earns up to Rs 8,000 in a month. But for the last one year, he hasn't been earning very well.

That is because his 6-year-old daughter Sharanya is very sick. He dares not stay away from home for too long because he is scared of not being around if her condition gets worse. Ever since she fell sick a year ago – Raju lives in a constant state of dread for his daughter's life.

Sharanya at the hospital with her mother

Sharanya's illness started with a fever. Her parents took her to the doctor, but no medication made her better. Eventually, she lost consciousness and started vomiting blood. They rushed her to Hyderabad fearing for her life – it was there that they were finally told what was wrong with Sharanya.

“I don't know what the condition is. All I know is that the blood flow to her stomach is blocked. I also know that the condition is so serious that it can kill her. As it is now, the spark of joy she had as a child is gone. Every time she has a fever or vomits, there is heavy pain in my heart and I am scared we will lose her forever,” explains Raju.

“In one year, my daughter has lost her spark of happiness”

Sharanya needs to make monthly visits to the hospital. It is a traumatic time for her because she needs to go with her uncle to the dreaded hospital instead of her parents. Raju feels that his 'educated' brother-in-law can deal with doctors better. Of late, Sharanya's medications are not helping and she has needed to go to the hospital more often. Her condition is clearly getting worse.

“I don't have 'study'. I am an illiterate person. My wife's brother takes Sharanya to the hospital. I can only talk to her when she calls me from the hospital. It falls to me to tell my scared, crying child that she will soon come back home when she gets better,” Raju says.

Sharanya with her parents at home

But Raju is really scared that Sharanya will not get better. As it is, she has changed a lot from the bubbly, happy girl who played for hours with her baby brother. Fearing the worst, they have stopped Sharanya's school as well. Sharanya needs regular hospital visits and blood transfusions – but her family is too poor to continue treatment.

“We sold off all my wife's jewellery and took all the money we saved for treatment. I don't know how to continue treatment. We have spent over Rs 2 lakhs and that is all we are capable of spending. My only hope for my daughter now is that she gets treatment and gets better. I can't see her in this condition,” Raju says.

Like any father, Raju loves his child and Sharanya was always his favorite. He is broken about not being able to pay for Sharanya's treatment and really needs some support saving her.

Your contribution will really give this family some much-needed hope.

The specifics of this campaign have been verified with the concerned hospital. For more details, please contact the campaign organiser or the hospital. 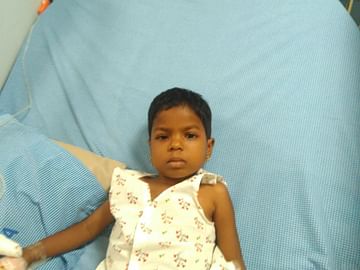 Sharanya has been vomiting blood and needs treatment before it is too late for her.