With Your Support This Mother Of 2 Young Boys Could Be Saved From Cancer | Milaap
loans added to your basket
Total : 0
Pay Now

You are sending a message to
Nagamani Ramisetti
Go back

Shares
Shares
Share on whatsapp
​​​​​​​​The Story of 34-year-old Nagamani is of Strength, Courage, Hope and Resilience. She is one of the great examples of how a woman handles multiple roles in a household and equally excels at every challenge she comes across. Nagamani has been a breadwinner, a caring mother, a concerned sister, a loving wife, and a supporting daughter. She has touched lives of everyone who are the part of her life.
Since the September of 2016, Nagamani has been suffering from AML Leukaemia (commonly known as Blood and Bone Marrow Cancer). Nagamani is a farmer and is barely able to feed the family of five people which includes two kids, her husband, and her father with her earnings. She needs to undergo a bone marrow transplant soon, which will cost her 18 lakh rupees. She needs your support to fund her treatment and to ensure her life is saved.

"Nagamani has been a fighter all her life"

Since a young age, Nagamani has been owning up the responsibility of her family on her shoulder. Her father was also a farmer and she grew up with extremely limited resources, working on farmlands helping her mother and her father with rice cultivation. To ensure she is able to make more money she even works as a labor in other farms.
Her life has been full of struggles and much sorrow. Her mother passed away 7 years ago, which left her father lonely and made him fall into a depression. Since then she has been taking care of her father and helped him move on with his life.
Nagamani's husband suffers from fits(Seizures) has to be constantly looked after, he is unable to work and move around much. Most of the days he is bedridden in addition to this she also needs to take care of her two young children despite so many people to look after she continues work hard in her farm and make a living out of it.

Last September Nagamani's younger son had to be admitted urgently for a surgery, due to some brain complications during that time Nagamani was diagnosed with cancer, she had extremely low white blood cell count and had suffered too much water retention in the lungs. She had to undergo a procedure to remove the extra water from lungs during the same time when her son was admitted. Despite recovering from the procedure she used to take care of her son and even travel from her village Malkapuram to the hospital in Vijayawada.

Ramesh, Nagamani's younger brother recalls how her sister has been a support structure to him and his family. She helped him get a good education while ensuring the burden of arranging funds was on her shoulders. She was his source of inspiration to get a job as a software engineer in an IT firm.She has single handily managed to get her children's schooling, managed her husband's medical expenses and taken care of their ancestral farmland.

Her children Saiteja(10) and Navdeep (7) miss seeing their mom healthy and working and have lost interest in in studies and going to school. They just want to see their mother healthy again. However, as Ramesh has limited means to help her sister and the only way to save her sister is by appealing others to help him in raising funds.

Why Should you contribute?

Nagamani has already spent 3 lakhs on her son's treatment, she even had to mortgage her house to arrange money for the child's treatment and has now exhausted all her savings. Ramesh manages to earn a salary of 20 thousand per month which he is already spending on his sister's treatment. Due to the financial troubles, the family is unable to arrange school fee for the kids since last 3 months as all the money has been spent on Nagamani's treatment.

The family even tried to get funds through PM/CM funds however they were unable to get any funds. Ramesh even tried to raise money with the help of the other employees at his company but nothing substantial has been raised.

The family currently needs 20 lakh rupees which includes 18 lakhs for BMT transplant along with 2 lakhs for post-operative care.

Your contribution will help a strong woman overcome another battle of cancer and continue to supporting her family.
Please contribute to saving Nagamani's life.

The specifics of this case have been verified by the medical team at the concerned hospital. For any clarification on the treatment or associated costs, contact the champion or the medical team.
Donate 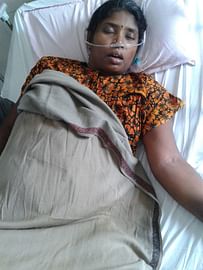 This Mother of 2 young boys need support to fight Cancer

Your support can save Nagamani from Blood Cancer