Farmer Is Neck-Deep In Loans Struggling To Save His Daughter From Blood Cancer | Milaap
loans added to your basket
Total : 0
Pay Now

Shares
Shares
Share on whatsapp
Jeevana was diagnosed with an aggressive blood cancer in February 2017. Since then, she has undergone chemotherapy and even a bone-marrow transplant. Unfortunately, she has developed a complication because of the transplant and to live - she needs urgent treatment.
Jeevana has been bravely fighting blood cancer since February

Jeevana's father has spent everything he has for her treatment

Jeevana developed Acute Myeloid Leukaemia – blood cancer - before she could even give her class 9 exams. Her cancer was growing at a very fast rate and without treatment, it would have spread very fast in different organs of the body.
Her father Virupachi is a tenant farmer who didn't have funds for cancer treatment. But he borrowed as much as he could and brought her to Hyderabad where her treatment could start. A crowdfunding campaign, as well as help from the Chief Minister's funds, helped her get treated with chemotherapy and a bone-marrow transplant.
Jeevana with her parents. They have put everything they have into her treatment
Unfortunately, Jeevana's body rejected the transplant and she needs treatment to help her body adjust to the graft. The doctors are sure that with treatment and close monitoring, she will get better. But Virupachi has run out of funds and has nothing left to save Jeevana.

“Being indebted is nothing new to a farmer. If crops fail even one season, we need to borrow for the next season. I have taken as many loans as I could have and used it all for Jeevana's treatment. After months, the doctor says she will get better and we don't want to give up at this stage,” says Virupachi.

Life has changed drastically for this teenager since the dreaded diagnosis. As the middle child of the family, Jeevana is vivacious, diplomatic one.Through her strenuous treatment, she kept her parents strong by telling them that it was all right. She could take it because she wanted to live.

“She has suffered so much. Fever, vomitting, passing blood in her urine, bleeding and ulcers in her stomach. The medicines made her very sick, but she never complained. Cancer has caused her to grow up sooner than her time,” Virupachi says.

Jeevana has finally almost beaten cancer. Now she is fighting graft-versus-host-disease due to her transplant
For the last 6 months, Virupachi and his Gayatri have been living in Hyderabad. Travelling every week from their village Nidzur was not only just as expensive but also exposed Jeevana to unnecessary infection risks. Jeevana's older sister Madhuri and her younger brother are back home and are being care for by an uncle.
Jeevana's younger brother is only 6 and he often calls his parents crying and asking them to come back. Everyone in the family is waiting for this nightmare to be over and for Jeevana to come back to them healthy and recovered from her terrible condition.

Virupachi has already spent Rs 25 lakhs he doesn't have on Jeevana's treatment. The situation is really desperate and at this last stage, if she doesn't get help, Jeevana's treatment will be stopped. The last few months have been a terrible time for this family. You can finally bring hope to Jeevana in the last stage of her fight against cancer. 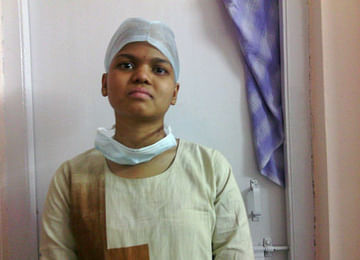 Jeevana has been fighting cancer for a year and her farmer father needs your help to save her.