A Cab Driver By Day, A Father Fighting His Son's Cancer at | Milaap

S
You are sending a message to
Shivam
Go back

A Cab Driver By Day, A Father Fighting His Son's Cancer at Night

Shivam drives his taxi along the busy lanes of New Delhi. He drops off his last passenger at their destination, and clocks out for the day. It has been a long day at his job as a taxi driver, and he is exhausted. He wished he could get a day off, but he cannot, as he would lose an entire day's pay. And he has to earn and save every penny, as he needs to fund his 4 year old son Harsh's treatment. Harsh is suffering from cancer.

A taxi driver and his family

Shivam lives with his family of six in Kalyanpuri, New Delhi. His family consists of his wife, his two daughters, and two sons. Harsh is the baby of the family. With his wife as a homemaker, Shivam is the only earning member of the family. He is employed as a taxi driver with a local cab operator, from whom he has rented his taxi. He pays a monthly rent for the vehicle. Occasionally, Shivam's mother sets up a vegetable stall to support the family's income.

Life has not been easy for Shivam or his family. He is overworked, but he needs to push on, and be able to feed his family. He sends his kids to school, feeds them, and keeps all of them together.

A day like any other, with a small difference

It was like any other day, with the slight exception of Harsh running a slight temperature. Shivam wanted to skip work and spend time with the little one, but he could not afford to do so. Missing just a day of work would mean loss of pay, and Shivam needed to earn every rupee to put food on the table. Assuming Harsh would be better by evening, Shivam left for the day.

However, two days later, Harsh was still running a fever. He drifted in and out of consciousness, with his temperature fluctuating. Concerned, Shivam rushed him to the government hospital. The doctors at the hospital ordered various tests to be conducted on harsh, so they could produce a diagnosis. The tests took a long time. For 4 months, Harsh was on various medications, with little improvement in his health.

The test results finally came in, and carried a devastating diagnosis – Harsh was suffering from pre-Bcell acute lymphoblastic leukaemia, a form of blood cancer.

Harsh's treatment and medication needed to be arranged immediately. However, Shivam was helpless as he did not have enough funds to provide for his son's treatment. He was able to take a loan of Rs. 1.5 lakhs for the treatment. However, this was barely enough, and Harsh's condition needed to be treated immediately. More funds were required. The doctors at the government hospital where Harsh was admitted asked Shivam to transfer the child to Dharamshila Hospital.

At Dharamshila Hospital, Harsh's prognosis was looked at. His doctor, Dr. Sarita Jaiswal, had words that brought some relief – Harsh had a chance of recovering completely with just chemotherapy. There was no need for a transplant or any such procedure. However, the treatment would cost Rs. 25 lakhs. The amount is beyond something Shivam can even think of affording. He has already spent around Rs. 4.5 lakhs on tests, and medication so far.

As the family could not further the expenses of the treatment, Harsh had to be discharged from the hospital. Shivam and the rest of his family now turn to generous members of the public for help. With a small contribution from you, Harsh can get undergo chemotherapy and beat his cancer. And he can go back to living the life of a child, who should never know a life with cancer. 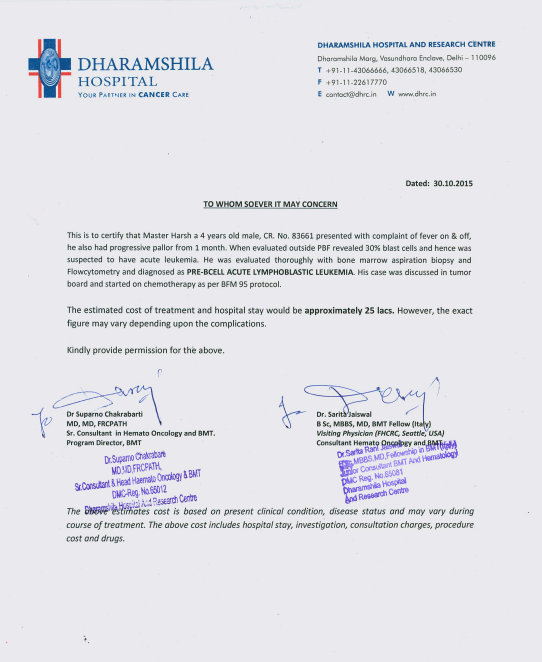 Click here to learn how you can help save Harsh