IS
You are sending a message to
Indrarani S
Go back

15 year old Hari should be at school, preparing for his board exams. The only worry he should have is if he has enough time to play cricket in the evening, after his studies. Instead, he's worried if he'll ever recover from his cancer.

Hari and his family are from the town of Thirukattupalli, Tamil Nadu. In August of 2014, Hari had just started his XI Standard; it had been over a month since he started school in a new class when he fell ill. He complained of a fever and an earache. Because he was in a residential school in Thanjavur, his parents, Indrani and Saravanan, could not always keep an eye on his health. They had to come to the school to pick him up and take him to a doctor. Recalls Indrani, “When we asked him what was wrong, he only told us of his earache and fever.” However, when his doctor asked him of various symptoms - “Do you have a headache?” “Do you feel dizzy?” “Do you feel tired all the time?” - Hari replied in affirmative to all of them. The doctor suspected anaemia, and asked the parents to take Hari to a paediatrician.

The paediatrician examined Hari's condition and then ordered a few blood tests to be done on the teenager. The blood tests revealed that Hari's blood platelets count was extremely low -  they were only around 36,000, whereas a normal level is between 1.5 to 4 lakhs. His haemoglobin level was also abnormally low, at 3 – a healthy person's haemoglobin level is between 11 to 14.

The paediatrician told Hari's worried parents to take him to a government hospital in Thanjavur – the nearest city to them – or to Meenakshi Mission hospital, so that the boy would get better care. When they took him to the government hospital in Thanjavur, they ran some more blood tests. The tests then confirmed the doctors' and parents' worst fears – Hari was suffering from Acute Myeloid Leukaemia, a form of blood cancer.

The doctors at the hospital asked the parents to take Hari to Chennai for treatment. For the last year, Hari has been undergoing chemotherapy in Chennai. He has finished over 12 rounds of chemotherapy already. Just when his prognosis was looking good, his cancer relapsed. Now, Hari is fighting his cancer all over again.

Indrani remembers how she broke down in front of Dr. Raj. “I was sobbing. I told her to do anything to save my son.” Hari needed a matching bone marrow donor. Indrani, Saravanan, and their younger daughter, got themselves tested to see if they could be donors for Hari; unfortunately, none of them were a match. The search for a matching donor began.

Dr. Raj soon found a matching donor for Hari. However, Hari and his family are facing a roadblock in proceeding with the transplant; they are severely strapped for finances required for the procedure. Indrani is a homemaker while Saravanan works as a cloth salesman. They have already sold their home in Thirukattupalli, to fund Hari's chemotherapy, which has set them back by six and a half lakhs. The bone marrow transplant will cost Rs. 35 lakhs, an amount the family cannot afford.

Hari only sits at home all day now, as he is not in a physical condition to attend school. He dropped out of school over a year and a half back. Indrani speaks proudly of her son, “He is always amongst the top 5 students in class. In fact, when he was ill, he had to write a test, and was afraid that he had done badly. He went to score 45 out 50 marks.” Indrani's voice trails off when she remembers her son's condition, “It pains us to see him like this. He is such a happy, energetic child. He loves playing cricket, and participates in several co-curricular activities. In fact, he was always so keen on playing sports that we decided to place him in a residential school to make him more responsible. Of course, had I known what was to happen to him , I never would have let him out of my sight.”

Hari has only been educated up till VIII Standard. He cannot be allowed to attend school as a regular student until he recovers completely. You can help Hari and his family by contributing for his bone marrow transplant. With your support, the young boy stands a chance of recovering and leading a full, happy life.

Click here to learn how you can help save Hari from cancer. 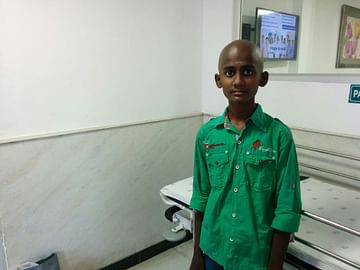 Your support can help him get the bone marrow transplant he urgently needs.