4-Year-Old Dhanush Is In The Risk Of Losing His Life To Cancer If Not Treated Urgently | Milaap
loans added to your basket
Total : 0
Pay Now

“Every day is a battle for my child. The only cure for my son’s cancer now is a bone marrow transplant. We live in constant fear of losing him. He hasn’t known a childhood without pain, and now he might lose his life.”

Dhanush looks at his mother, tears rolling down his eyes. His mother understands his tears more than anyone else. Afterall, she is seeing her son's fight with cancer for the past many months. She knows he is in pain but how can she tell him that his poor parents have nothing left to support his treatment.

4-year-old Dhanush has been living with blood cancer for two years and hasn’t spent a day without pain. Kusuma has watched her once active and energetic child turn completely weak and helpless because of cancer. Dhanush’s only chance to beat cancer is chemotherapy followed by a bone marrow transplant.

“My baby was diagnosed with blood cancer. I was so scared that he wouldn’t make it, and only negative thoughts occupied my mind. I never thought he would go through so much at such a young age. It has changed him completely."

It all began when Dhanush started falling sick. Kusuma noticed a lump on his neck and took him to the doctor. Dhanush had numerous blood tests before he was diagnosed with blood cancer. He underwent chemotherapy for 6 months. Reports showed he was cured. Kusuma and Ashok felt a sign of great relief. Their son was saved. But the worst was not over. Dhanush’s cancer relapsed. The only treatment for him now is a bone marrow transplant at the earliest.

Kusuma and Ashok have already spent nearly 8 lakhs on their son’s treatment. Ashok is a construction worker in their hometown in Bantakal, Karnataka, and can visit Dhanush very rarely. Their 2-year-old daughter has been left in the care of Kusuma’s sister, while Kusuma stays in the hospital with Dhanush in Bangalore.


“My husband calls me every day asking about Dhanush. He can’t be here with us because he needs to work, and we have no other source of income. We’re struggling to get by. My daughter cries every day because she’s not with us. We are emotionally and financially drained right now.”

Ashok doesn’t have the funds to pay 20 lakhs for Dhanush’s chemotherapy and bone marrow transplant. They have sold all their jewellery and borrowed from friends and family to pay for his treatment so far. Ashok’s earnings of Rs. 350 per day isn’t enough to pay for his son’s treatment.

All Kusuma longs for is for her son to have a normal childhood. She hopes that one day their family can be together again, and Dhanush will grow up to be healthy.

“He barely talks anymore, but when he does, he looks at me with tears in his eyes asking when we can go home again. I don’t know what to say to him in those times. Without funds, we will be forced to stop treatment. We can’t borrow from family members anymore because they also don’t have much themselves. I hope and pray that we get help soon and my son lives a life free of misery.”

Dhanush needs chemotherapy followed by a bone marrow transplant at the earliest to beat blood cancer. This is his second battle with cancer, and Kusuma is determined not to let the financial difficulty take her son away from her. She and Ashok have no means to pay for his treatment anymore. Dhanush needs 20 lakhs to live.

The news of Dhanush's cancer devastated his parents. They pray that no other child should go through this suffering. There is a very little time left for Dhanush to recover completely and it's crucial that he continues the treatment. With our support, his parents can save him from cancer. 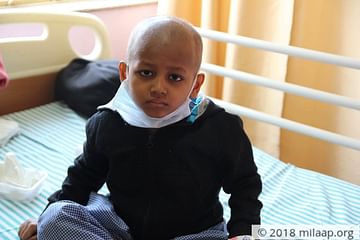 There is very little time left to save this boy from cancer. He needs to continue treatment.

UPI: rzpy.givetomlpkusuma00004@hdfcbank (Copy to clipboard)
Or
Click here to read the instructions before you make a bank transfer.