Both Of Chukit’s Kidneys Have Failed And She Needs An Immediate Transplant To Live | Milaap
loans added to your basket
Total : 0
Pay Now

RK
You are sending a message to
Rafit Khan
Go back

Shares
Shares
Share on whatsapp
5-year-old Zareen misses spending time with her mother, Chukit, who is currently bedridden with swollen arms and legs. Rafit Khan (Chukit's husband and Zareen's father), works as a cook in a Chennai and makes Rs. 10,000/month for the family. He is working extra hard to make enough for a kidney transplant Chukit needs as she is suffering from total renal failure and needs a kidney transplant immediately, in order to live.

“My daughter cries on phone everyday because she can’t see her mother.”

Chukit’s condition was misdiagnosed as a thyroid problem

Chukit’s fingers and legs used to swell up and hurt every morning when she woke up. When Rafit took her to the doctor, he prescribed blood and urine tests and attributed her condition to a thyroid problem and low hemoglobin levels. He gave her some medicines and for a short while, Chukit seemed to recover.

Soon after she started getting swollen legs and fingers again and it became painful to tolerate. She also developed other symptoms such as nausea and aversion towards food. She rapidly began losing weight and strength and was taken to a hospital in Chennai. A master health check-up diagnosed her with total kidney failure.


Rafit decided to take a second opinion and took his wife to Vellore. There, the doctors gave him the ultimatum of either a lifetime of dialysis or a kidney transplant. Rafit works as a cook in a Chennai restaurant and barely makes enough to meet household expenses. Chukit’s illness threw him off balance and he came to Kolkata with his wife and daughter, where his mother and rest of the family lives.

“Dialysis is an expensive process, and it’s cost me Rs 50 thousand in the past one week”

Rafit is clearly unable to bear the expenses of his wife’s treatment and that has also caused their 5-year-old daughter Zareen to drop out of school. He’s left Zareen under his mother’s care and spends all his time taking care of Chukit in the hospital. She has had three dialysis sessions this week, and it has drained Rafit of all his money.


He’s spent all his savings towards her treatment and to meet the expenses so far, has also taken a loan from his friend. But that’s all the help he could get and now he has no way of paying any more bills. Adding to the misery, he’s also had to leave his job so that he can take care of his wife and now he has no source of income either.

Zareen keeps crying all the time for her mother.

As if the financial and personal crisis was not enough, Chukit’s condition is taking a toll on Zareen too. She has been told that her mom is sick and is in the hospital to take injections. The innocent little girl calls Rafit every day and cries that she wants to see her mother. She misses her terribly. Rafit is torn both emotionally and financially and doesn’t know to take care of the situation anymore, but he’s determined to save his wife in the face of adversity.

In his current situation, poverty is the biggest problem looming over the Khan family. His lack of funds is deterring the course of his wife’s treatment. She needs a transplant immediately, lest she loses her life.

Chukit Khan deserves a fair shot at living and your contribution can make it possible. 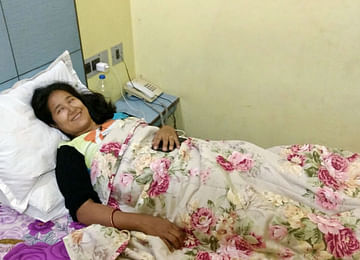 Chukit Khan suffers from total renal failure and only a kidney transplant can save her.