2-Year-Old Aniketh Is Going Through Excruciating Pain Because He Has Advanced Liver Cancer. Help Him Live! | Milaap
loans added to your basket
Total : 0
Pay Now

2-Year-Old Aniketh Is Going Through Excruciating Pain Because He Has Advanced Liver Cancer. Help Him Live!

Shares
Shares
Share on whatsapp
Aniketh is a 2-year-old with a fast-progressing liver cancer. His cancer has spread to the pancreas and he needs chemotherapy and surgery to get better. His father Krishna is a an attendant in a private college in Mysore, and is struggling to fund Aniketh's expensive treatment.
Aniketh with his parents Krishna and Asha

Aniketh's cancer was not diagnosed for over a year

Aniketh's parents were just giving him toilet-training. It is not unusual for children to avoid the process, but Aniketh refused too often and seemed almost scared. Aniketh told his parents that he couldn't excrete because he had an 'abbu' (his word to describe hurt). His parents took him to the doctor but, laxatives usually seemed to take care of constipation.
Looking back, Aniketh's parents are appalled that they didn't see the signs - Aniketh's regular diarrhea and constipation. Only when he became weak and his stomach started swelling did they realize that it wasn't just a digestion or toilet training problem. They decided to come to Bangalore for a diagnosis.


The treatment has made Aniketh cranky and weak

“We found out that he has cancer. It has spread to the pancreas and was obstructing his intestine. Which is why he's been having trouble with motions. All this time, he was trying to tell us that he was hurting, but we didn't realise until this late.” says Krishna.

Krishna and his wife Asha are not only dealing with their child's illness but are also feeling crushed by the guilt of not having found out sooner. They keep going over the different signs that were present and how they should have known that their son was sick.
Aniketh has already started his first cycle of chemotherapy

“The visits to the hospital have made Aniketh cranky and even the sight of a doctor is enough for him to start begging to go home. Over and over we tell him an injection or the pain of a needle is just for a few minutes. Now, he has a chemo-port in his chest and we have to make sure he doesn't hurt himself by pulling it out,” Krishna says.

Aniketh has started chemotherapy and the doctor has recommended five more cycles and a surgery for now. Krishna has borrowed heavily to pay for the tests and medicines so far, but he can't afford the entire treatment. The thought is weighing heavily on Krishna
Aniketh has a chemotherapy-port inserted in his chest to be able to take medicines for cancer

“Till now, we have spent close to 2 lakhs and the doctor says we will need another 10 lakhs more. I am only an attendant and my wife is also not earning because she has to look after Aniketh. He is an innocent, happy child– and he deserves at least a fighting chance,” Krishna says.

Even though it was caught late, it is not too late for Aniketh. With the right treatment, the doctor says that there is a good chance that he gets better. Krishna needs your support continuing the treatment and making sure that Aniketh gets the fighting chance that he deserves. You can support by a small contribution on her fundraiser page on Milaap (Crowdfunding India). 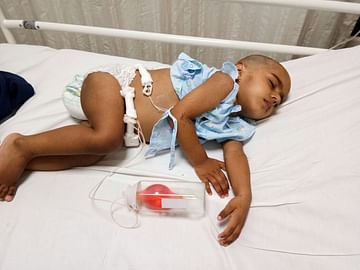