MV
You are sending a message to
Malar Vizhi
Go back

Shares
Shares
Share on whatsapp
When you are young and thriving, the last thing on your mind should be an impending heart surgery, without which you might not be able to live to see another day. But 17-year-old Abinash does not have the privilege to beg ignorance as many belonging to his age do. He is suffering and is well aware of the dreaded fact that if things don't go well, this might be the last he ever breathes.

A life-long struggle to health

Abinash was born with a condition called Ventricular Septal Defect, or more commonly known as a hole in the heart wall. It is a condition in which the oxygen level entering the heart is severely compromised, due to which the patient often complains of 'faster and harder' breathing. While on medication for his condition since past 17 years, the doctors decided to operate Abinah in a bid to end the discomforts for once and all in May 2017.


The doctors performed surgery to repair the hole and while the hole was closed an infection spread in Abhinash's heart which has now made him very weak. Looking at his critical condition post-discharge, his father, Uday Chandra Haloi, took him to Apollo Children's Hospital in Chennai where he was diagnosed with Infected Endocarditis, which is an infection in the heart.

Upon considering multiple options and looking at the patient's critical state, Abinash has been recommended to urgently undergo an Open Heart surgery to replace the infected valves in his heart. The operation has to be done tomorrow, as any more delay could cost Abinash his life.

"He just wants it all to stop"

Abinash and his family hail from a small town in Assam. He's currently in class 12 and has been missing his classes from past few months due to the severity of his health that requires him to travel to Chennai quite often.

"He is not a child, we cannot fool him by saying that everything is alright. He knows everything that is going on with him. In fact, being the eldest of two siblings, he is the one who has to look after his parents, make sure that they are not worrying much. Before his first surgery was performed, he knew that it was not a big deal and people recover from this ailment all the time. But now, due to his infection in heart, he is scared. He is very young and shouldn't have to go through this all. He just wants this all to stop and go back to his hometown", said his cousin, Bikas Das who is currently in hospital with him.

Family needs help to save their son

In the family of four, Abinash's father is the sole earning member. He is a government employee in Assam and doesn't earn much. His mother is a home-maker. Whatever little savings that the family had got over during his first heart surgery. Their resources are now near depletion as they also have to manage the expenses required for staying in Chennai for the entire duration of his treatment. Coupled their financial inabilities with the nervousness over their son's critical condition, his parents are finding it difficult to continue holding on their own.

Abinash is a 17-year-old young adult who has a promising future ahead of him. He deserves every chance at sickness-free life. The estimated cost of entire treatment is Rs 5 Lakhs, an amount which is much beyond the family's meagre means. The surgery has to take place tomorrow, failing which Abinash's chances of survival are minimal. Funds raised through this fundraiser will go towards the treatment of this 17-year-old. 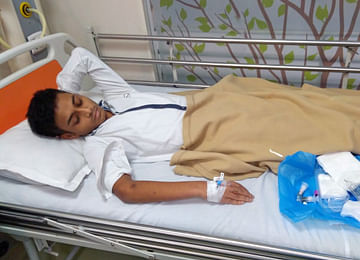 17-year-old Abinash urgently needs to undergo a heart surgery as an infection in his heart may...