This 6-year-old May Lose His Hand To Cancer, And Even His Life Without Your Help | Milaap
loans added to your basket
Total : 0
Pay Now

This 6-year-old May Lose His Hand To Cancer, And Even His Life Without Your Help

Shares
Shares
Share on whatsapp
It was just a month ago when Sam Jeevan was diagnosed with cancer for the first time.
Sam Jeevan is just an 6-year-old with aggressive form of cancer. His parents have taken him to several hospitals, finally landing up at HCG, Bangalore. All he needs is hope and support to make a stand against this deadly disease.

All about the family

Originally from Shimoga, Karnataka, Sam Jeevan comes from a loving family of four including his father, Guru, mother, Indira and a 7-month-old younger sister, Prarthana. The parents celebrated with joy when the first child was born, but the happiness was short-lived. Guru is a daily wage laborer in the village, earning Rs 400 a day which is barely enough to manage the household.

“30% of my salary goes on the rent. And with the remaining, I am struggling hard to bear all the other expenses. My savings is almost negligible and I am still settling the debts.”

A fall that resulted in catastrophic complications

It was one of those evenings when the 1-year-old Sam Jeevan was engrossed in playing with his friends. He tripped and fell on the ground. All kids fall, so nobody thought that it could ever result in such complications.
After a couple of months, the swelling in his right hand increased tremendously, the pain aggravated limiting the movement. When they rushed their baby boy to the local hospital, tests revealed that he had a malignant tumor.

However, the family delayed the operation, which was then the only way to cure him. “What could I do? I had no money to bear my child’s medical expenses. And neither could I go to any of my relatives for help. We were perplexed and did not know how to comfort Sam Jeevan”- Guru.

Loan was the answer to their prayers at the time

Guru took a loan of Rs 50000 from the money lenders, for Sam Jeevan's surgery. And by God’s grace, the operation was successful. The family was relieved hoping that all his problems were vanished and thought that lady luck was smiling on them.

“Since childhood, my baby has been suffering. He was born premature and placed in the NICU on the ventilator for almost 2 weeks. I could not even see or hold my child for long during that time." - Indira

A childhood filled with pain

The surgery gave him a new life. He started going to school. And he became happier. Things were perfect. Financial difficulties existed just like everywhere else, but the parents were doing their best to make both ends meet. Just when the parents thought their troubles were behind them, March brought them bad news. Along with the swelling, there were unusual marks on their child's wrist. He was crying out of pain.
The doctors at a local hospital refused to admit due to lack of facilities. So they moved him to another place in Mangalore where he was under observation for over a month.

“Tests, more tests, and still the doctors were not sure what he hand. Our son was sick of being in the hospital. He wanted to go home and eat homemade food, attend Mass at Church on Sundays. The doctor gave us a choice, take him to a government hospital where the cure would be an amputation or bring him to HCG. I knew salvaging his hand at HCG would be expensive, but what choice is it for a parent to take away your son's hand?” asks Indira.

Cancer often tests your boundaries. Despite the odds, Indira and Guru are very clear on ensuring the best care for Sam Jeevan. They are doing their best to arrange for funds so their son can live.
Your contribution can help them give him a pain-free life which he much deserves. 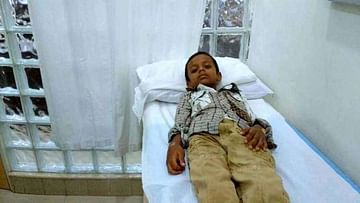 Cancer is claiming SamJeevan's hand and only you can help him keep it.