This Uber Driver Needs Urgent Help To Save His Son From Succumbing To Kidney Failure | Milaap
loans added to your basket
Total : 0
Pay Now

Shares
Shares
Share on whatsapp
14-year-old Roshan is the topper of his class. He is a part of the National Cadet Corps and till recently was in good health. In just one month, his condition suddenly worsened and the doctors found that both his kidneys had failed. He needs an urgent kidney transplant. His father has taken on an extra job to earn more and fund Roshan's treatment but it is not enough.
It took Joseph sometime before he accepted that his son had a major organ failure

Last month, on November 17, Roshan's eyes were swollen. Roshan was a healthy, growing boy and his parents thought he had just not slept enough. By next morning, his entire face was swollen and he had a piercing stomach ache. His parents panicked and took him to the hospital.

At the hospital, his parents Joseph and Mary were told that their son had kidney disease. The next few days, Roshan spent at the hospital – but his condition only worsened. The toxicity in his blood kept increasing. Roshan's kidneys had completely stopped functioning.
Roshan with his parents and younger brother Vivian

Joseph, Roshan's father could not accept that his son's condition had gotten so bad in just two weeks. He took Roshan to several doctors for a possible chance that Roshan may be cured without a transplant. Roshan's condition became worse. The doctors warned Joseph that Roshan would have a fatal cardiac arrest if not given dialysis.

Joseph had no choice but to accept that his son's kidneys were not functioning. It was only before the painful process of dialysis that he finally told Roshan what was wrong with him. The dialysis was necessary to take away Roshan's pain and to save his life.


Roshan's illness has made his quiet and withdrawn

Roshan needs dialysis once in two days. Roshan's life has taken an unexpected turn for the worse and he is scared of the disease that has made him unable to lead a normal life. This once confident happy boy has now become hesitant and withdrawn. Every dialysis makes him weaker and less hopeful of getting his old life back.

Joseph works as a private driver in the day. After the diagnosis, he became an Uber driver – taking on work in the night. But despite all his hard work, he earns only Rs 12,000 a month. Arranging Rs 5 lakhs for a transplant before Roshan has any other complications is simply impossible for him.

Joseph has used up all the savings he had and spent close to Rs 3 lakhs on treatment so far. Regular dialysis and medicines are other mounting expenses Joseph needs to take care of. He is desperate to get his son a transplant before he is completely out of funds to even arrange for his dialysis.

Roshan is in a lot of pain and he has no respite between two dialysis sessions. This chronic condition will eat away his natural good health. Further, there is a high chance of him developing further complications. While Joseph managed to save his son once, he may be unable to afford life-saving treatment next time. A kidney transplant is this family's only hope.

Your contribution can save Roshan from a life of pain. 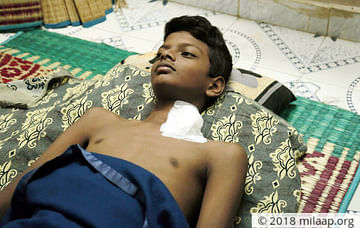 Help Roshan get a kidney transplant

14-year-old Roshan has kidney disease and his only chance at getting better is a kidney transplant.