This E-rickshaw Driver Was Killed Trying To Stop Men From Public Urination, His Family Needs Your Support | Milaap
loans added to your basket
Total : 0
Pay Now

You are sending a message to
Sarika
Go back

This E-rickshaw Driver Was Killed Trying To Stop Men From Public Urination, His Family Needs Your Support

Shares
Shares
Share on whatsapp
Can someone be beaten to death for simply trying to keep his country clean? No reason to believe - right?

Well, it happened on end of May 2017, when Ravindra, a 31-year-old e-rickshaw driver, was beaten to death when he tried to stop two people from urinating in public in northwest Delhi’s Mukherjee Nagar area.

Is this a reason to kill somebody? A life was a taken, a family ruined and left on the streets! Ravindra had never thought that a simple act f trying to keep India clean would cost him his life.

“Do not urinate here” - is all that he said

According to the reports, Ravindra had objected to two men urinating outside Gate number 4 of the GTB Nagar Metro station and asked them to use the public restroom which was barely five meters away.

The duo had purchased liquor, and told Ravinder that they would get back at him later, and left the place in another e-rickshaw. They got off near Kirori Mal College.

Ravindra never anticipated they would come back with 10 other boys

Around 8 PM, the duo, along with 10 others, returned to the metro station and attacked Ravinder. Another e-rickshaw driver, who tried to intervene, was also assaulted. Due to the multiple blows Ravinder suffered multiple injuries and succumbed to them and passed away.  The two perpetrators belonged to a prominent college in Delhi University's North Campus and have been detained in connection with the murder of the e-rickshaw driver.

After going through the CCTV footage of the area where the incident occurred, the two students were detained. It was found that they had consumed liquor and performed this brutal act.


“My brother has always paid attention to cleanliness. He would never go to work without taking a shower or changing his clothes. In fact, he would tell others at the (rickshaw) stand too to ensure that they are always well dressed and shower regularly. He lost his life because he asked two boys to stop urinating in public. It is your thoughts that make you ‘rich’ or ‘poor;’ not your money or wealth,” recalls Rajesh who is Ravindra’s older brother."

His mother and wife can never be back to normalcy

His mother and wife are not in a condition to talk to anybody. His Mother just stares blankly into space and cries silently. His wife has been very disturbed ever since.

"I am the eldest. I cannot afford to break down. I have to hold it together for everybody else’s sake,” explained Rajesh.


“I have sung lullabies and put my brother to sleep. I have helped him tie his sehra for his wedding. I have now also lit his pyre. Unfortunately, I was not able to see him one last time in his last moments,” he said, recalling the biggest regret he has. Rajesh was visiting family back in his village in Haryana when the unfortunate incident happened

Rajesh's family apart from emotional support also requires financial support to carry on with their life. His wife is expecting a child and it would be difficult for her to raise the child without a father and without funds.

How you can help this family

Your contribution will certainly help the family to recover with grief and move ahead in life. A generous collection of 5 lakhs will help the family and child for the next few years. 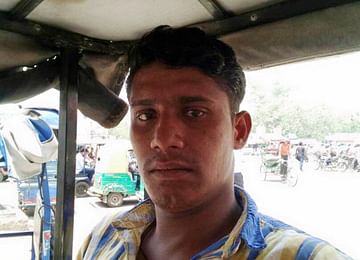 Ravindra Was Killed Trying To Stop Men From Public Urination

Ravindra gave his life for “keeping Bharath Swacch”. His family is in need of our support.