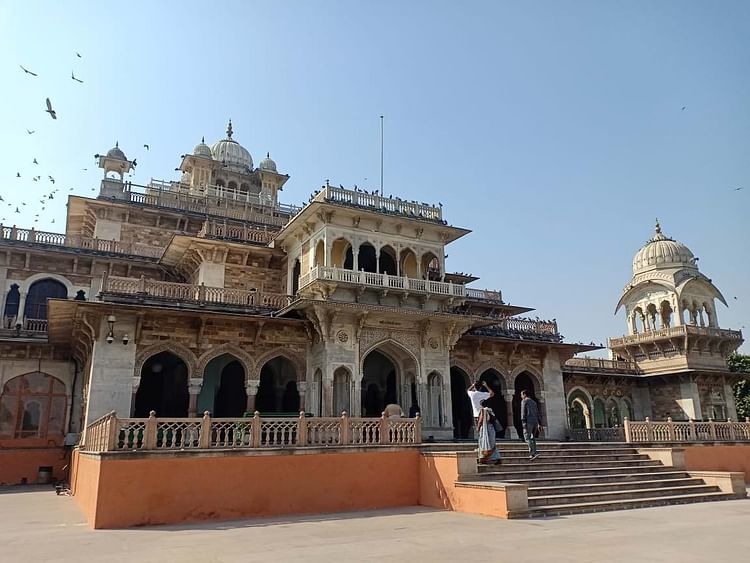 Albert Hall Museum
Jaipur has always be known for its aesthetic and architectural expertise. The Albert Hall museum is one of the architectural gems in the pink city. Located in the beautiful Ramnivas garden, the museum holds a variety of the ancient work of local artisans in and around India and the neighbouring countries. The purpose of the museum was to preserve the art of local artists which might have faded otherwise. The foundation stone of the Albert Hall Museum was laid in the year 1867 when the Prince of Wales visited India.

The museum was designed by Major Samuel Swinton Jacob. He was a British military engineer who became the director of the Jaipur PWD in 1867 and spent the rest of his 35 year career in Jaipur, contributing substantially to the architectural activities of the time.The task of designing and building the Albert Hall fell on the shoulders of Swinton Jacob. He sent his staff to study the Mughal monuments in Delhi, Agra and Fatehpur Sikhri to be inspired to come up with new design ideas for Albert Hall. The architectural style adopted was Indo- Saracenic. It combines the horizontal lines of traditional Hindu architecture with the curved shapes typical of Byzantine and Italianate structures to present a vision of East and West meeting in a harmonious and mutually beneficial fashion. 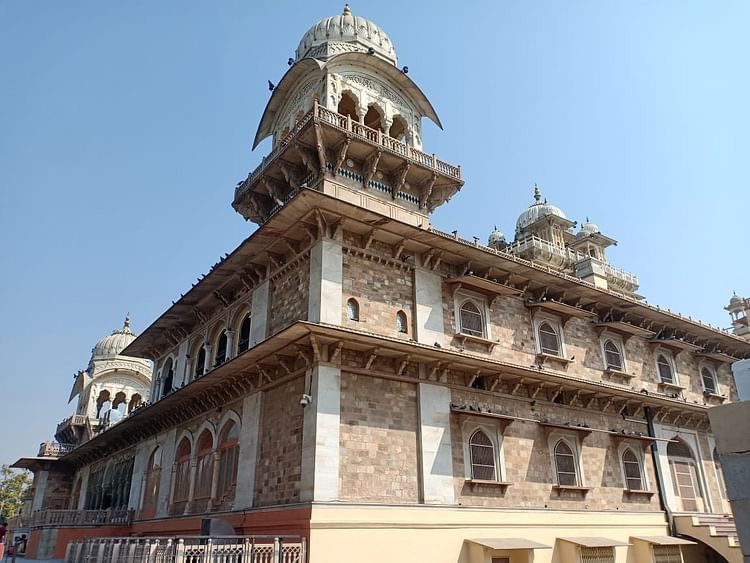 The architectural expertise in Albert Hall
It is important to note that India was under the British rule in those days and there was a need to preserve and protect the tradition of India. The museum collection was made under the superintendence of Colonel TN Hendley. It was commenced in August 1331. There were temporary rooms that were set up around the city to house the different artefacts and were finally shifted to the main building in September 1336. Carpets from the 17th to 19th century along with a lot of wooden and international art, jewellery and ivory designs, musical instruments, sculptures, stone carvings, arms and armour and many such things have been retained in the museum. The collection is not just limited to India, there are pottery masterpieces displayed from Britain, Turkey, Japan and Iran. The museum also displays an Egyptian mummy from the 322-30 B.C. 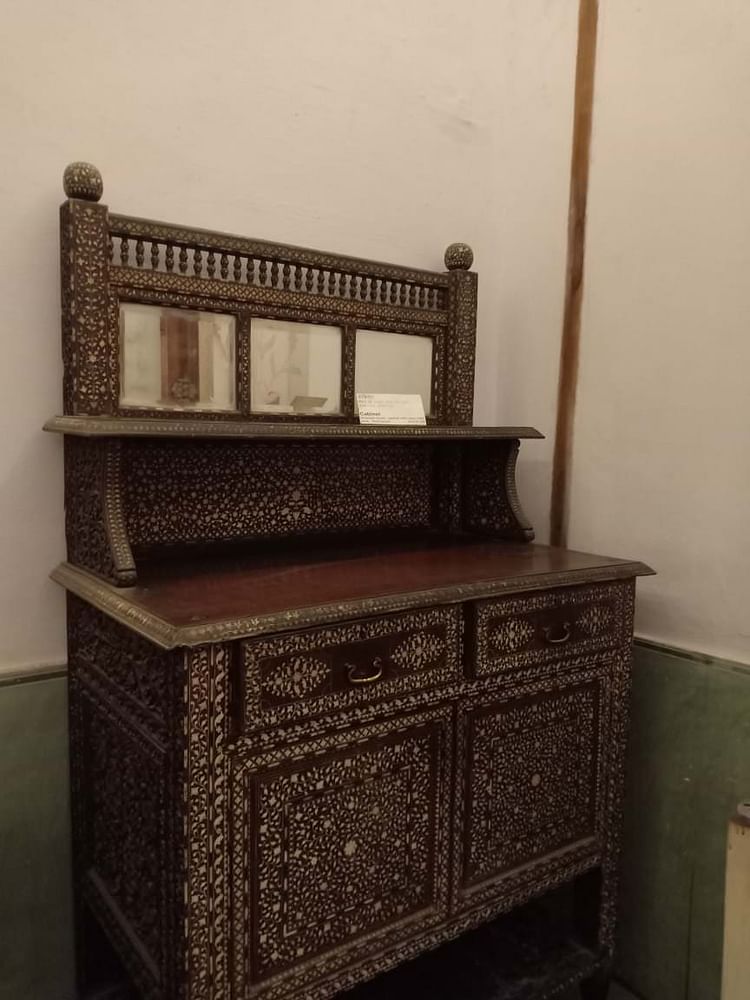 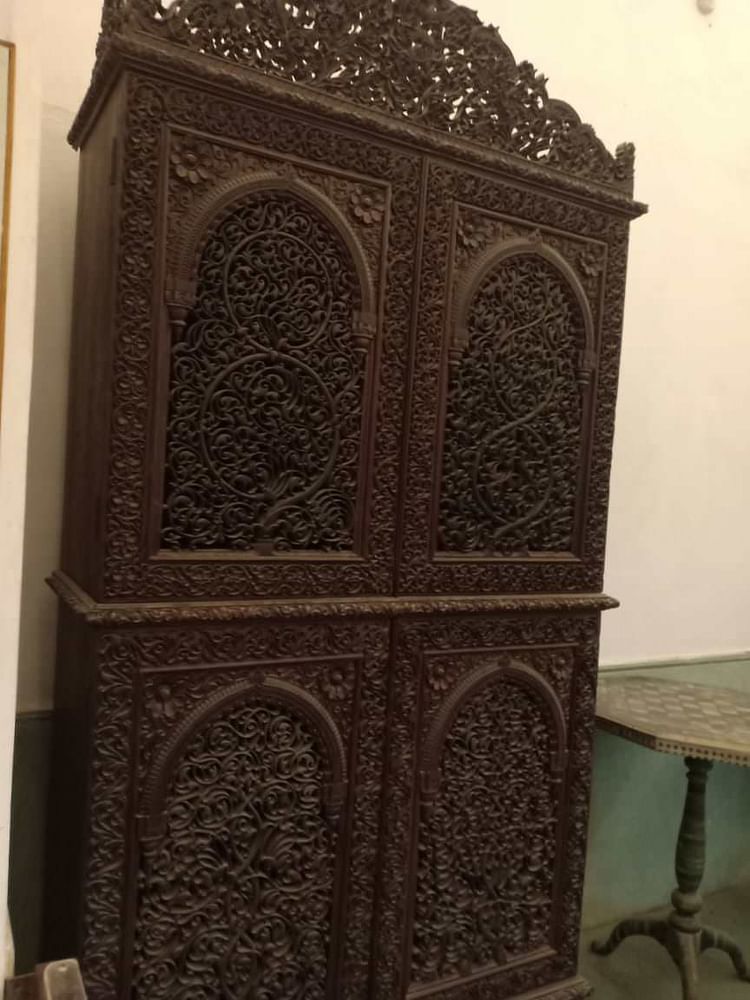 An Almirah
The museum treasures masterpieces of wood carving from the 19th century, which was purchased in national and international exhibitions while some were gifts from dignitaries visiting the museum. The wood used for the work in India were teak, shisham, deodar, sandalwood, ebony, red wood etc. The craftsmen selected the wood based on the grain of the timbre, depending on what they were going to make. Teak, redwood and walnut was considered good for sculpture work while sandalwood was excellent for intricate and delicate workmanship. 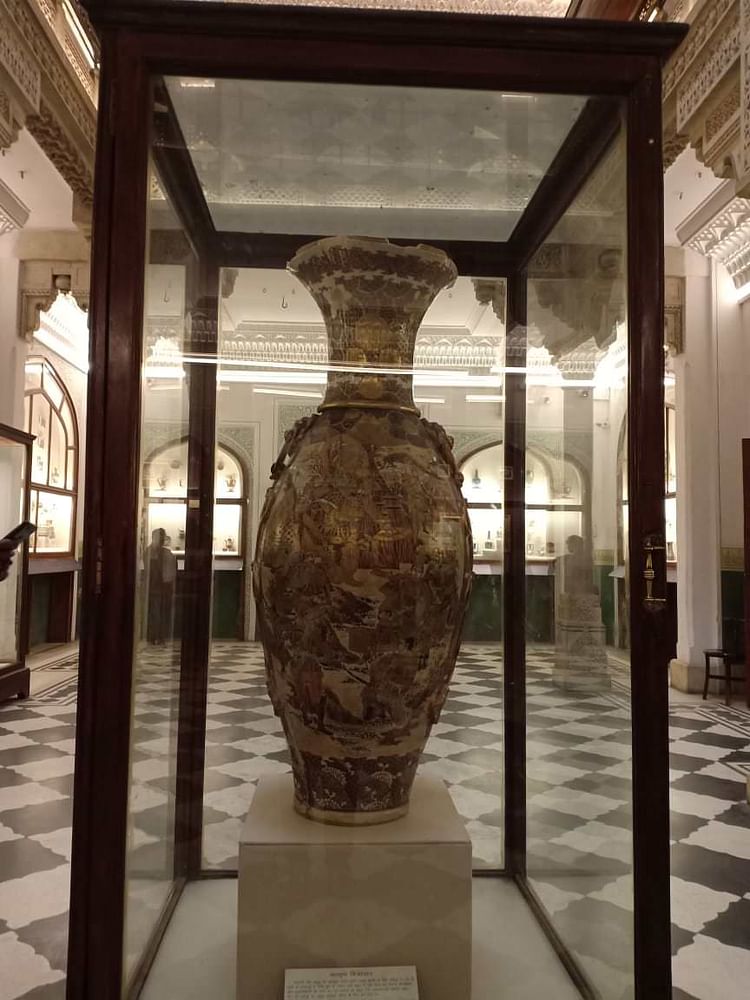 The Albert Hall museum houses some of the finest pottery collections of the 19th century. Raw and fired clay has played a vital part of the daily life and ritual of the Indian people. The vessel making tradition goes back in time to the ‘Kalasa’ or pot that was used to carry the nectar or amrit for the gods. Albert hall has a fine display of the unglazed traditional vessels with decorative finishes like burnishing and painted, incised and cutwork unglazed pottery. 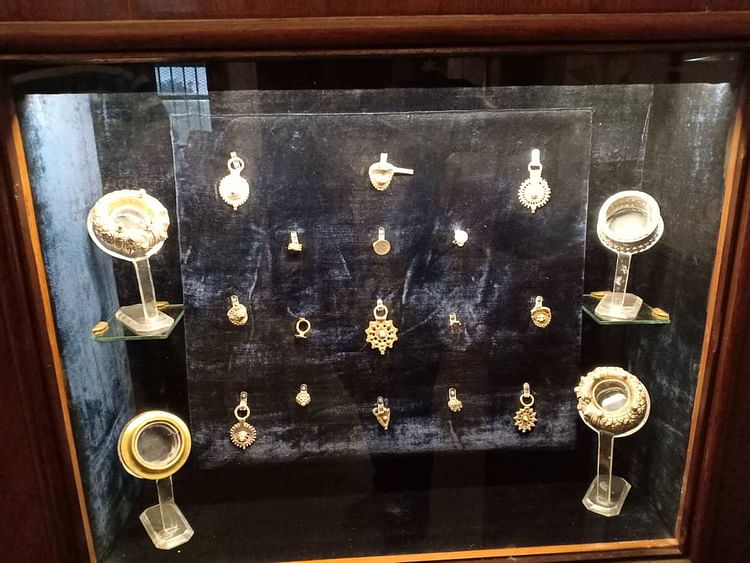 Ear studs and bracelets and neck pieces
worn by the people 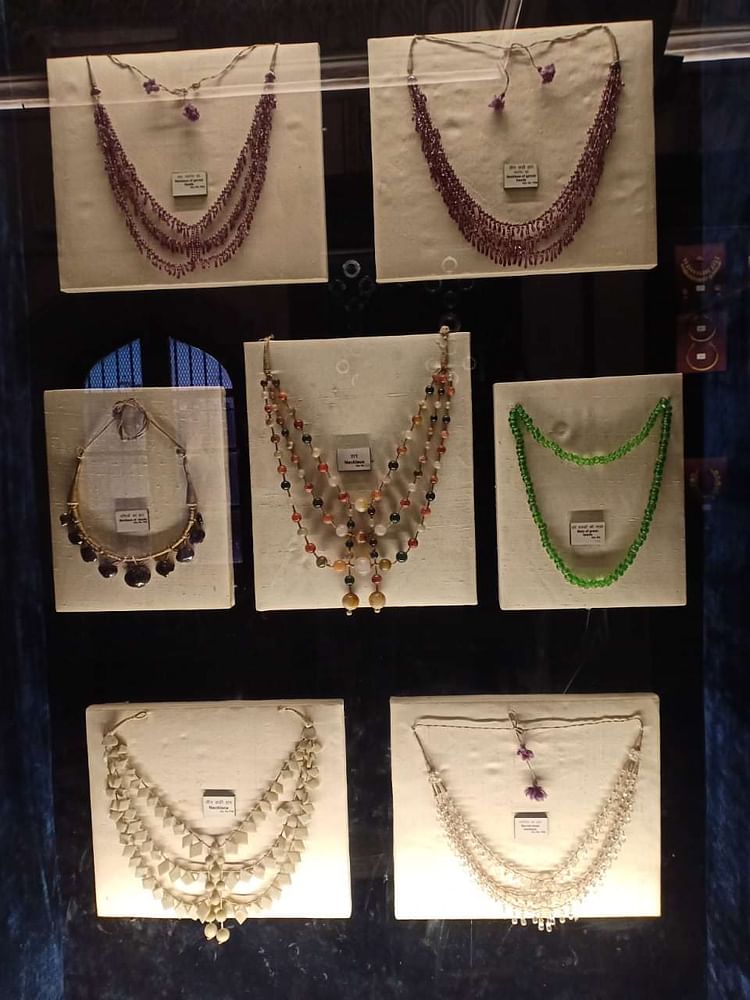 The museum also has a jewellery collection which include rare pieces worn by the elite as well as simple pieces worn by the peasant class in the 19th century. A list of common ornaments made of brass, silver and gilat, an alloy were prepared by the clerk and then purchased from village markets and fairs. Rings, bracelets, waist belts, ear studs, forehead and foot ornaments were some of the items purchased. 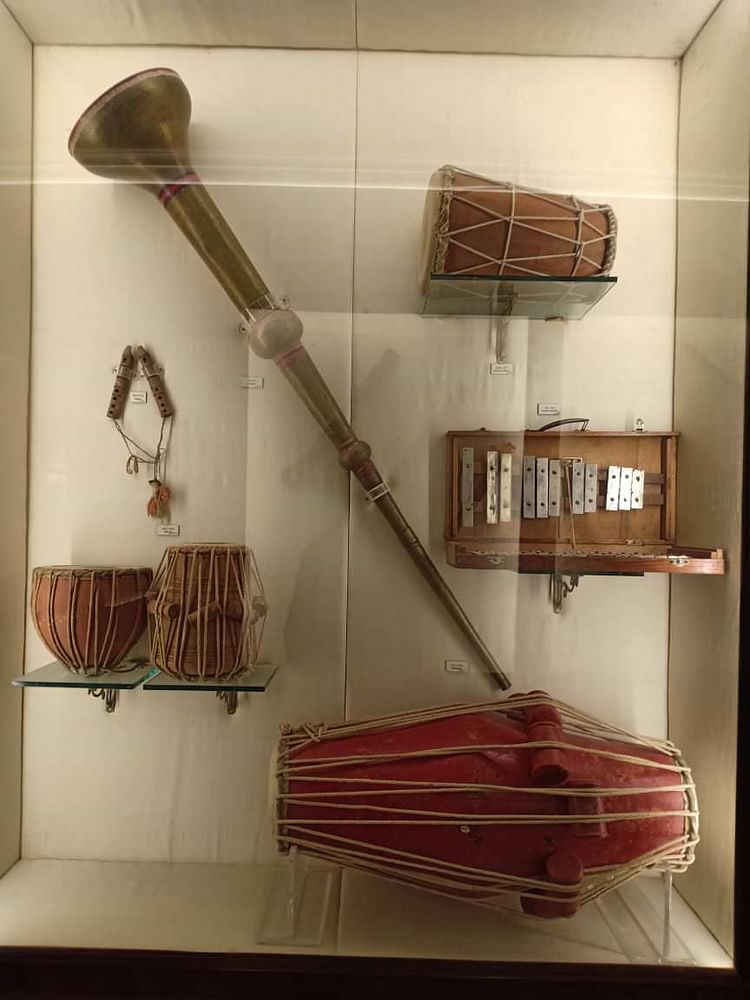 A collection of Tabla, Mridangam and Sarangi at display

Musical instruments are evidences of our traditional and cultural heritage. Their history dates back to the beginning of human culture. Earlier they might have been used for rituals such as trumpet for success on the hunt or a drum for auspicious ceremonies. Cultures eventually developed composition and performance of melodies for entertainment over time. The gallery displays important musical instruments like the Sitar, Sarangi, Ektara, Dholak, Pakhavaj, Been, and Alghojha. 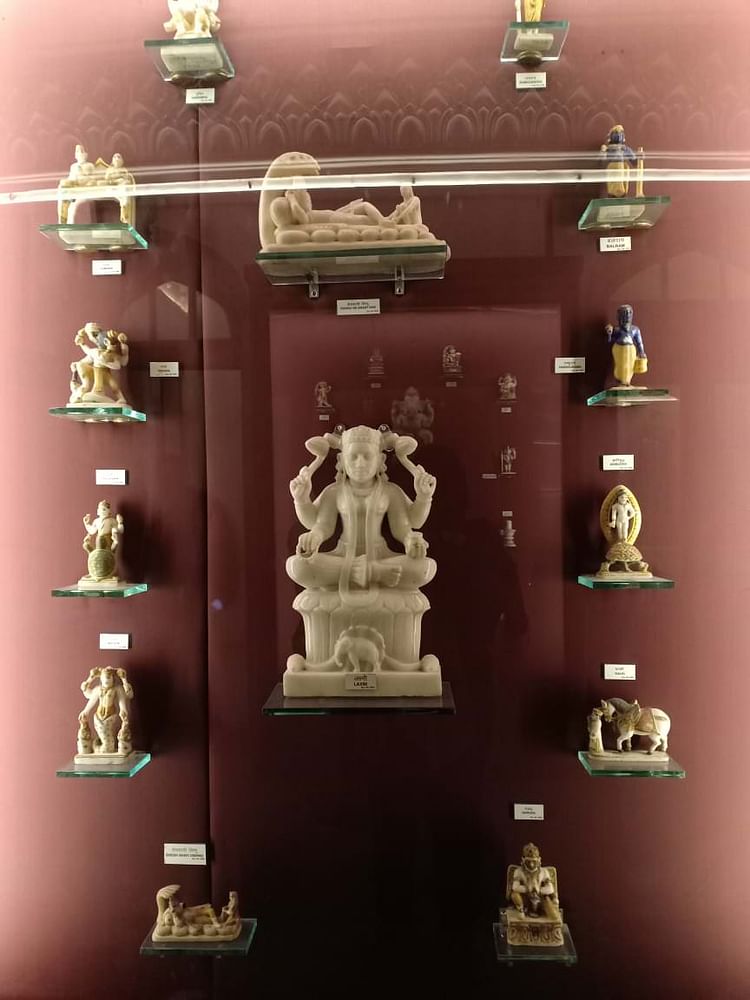 The carving of the Vishnu Pariwar

The Shiva Pariwar
The tradition of stone carving has been an important element of the Rajasthani culture. Some of the finest examples of Indian stone sculptures in Rajasthan can be found in temples, built by rulers and philanthropists. For centuries marble sculptures of deities have been carved by artisans in Jaipur. This was facilitated by the readily available marble from the famous Makrana mines, not very far from Jaipur. The Albert Hall Museum holds some examples of 19th century sculptures carved by Jaipur artisans showing an entire cosmology of Hindu and Jain deities. The display includes the Matrika, Marble art and the Brahma, Shiv and Vaishnav pariwars. 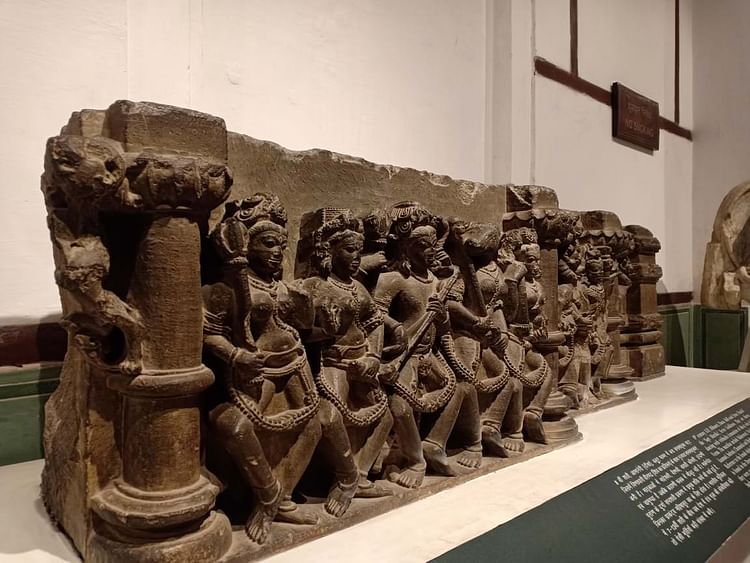 Buff sand-stone Panelof, the 'Sapt Matrika' or the seven goddesses. They are shown dancing the Veerbhadra (emanation of Shiva) who holds the Veena. The Matrikas include Maheshwari, Vaishnavi, Chamunda, Varahi, Kaumari, Indrani and Brahmani. It is a reference to the powerful forms of female deities found in the Durga Saptasati of the Markandeya Purana. They were created to vanquish the demon Mahisasur. 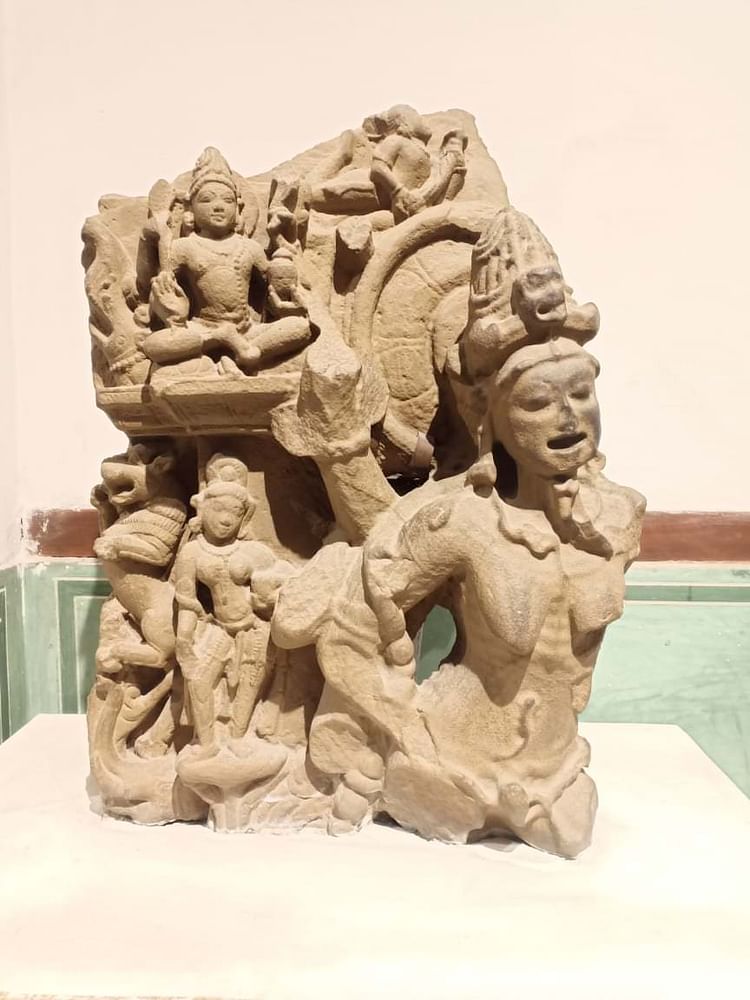 Chamunda as described in the Markandeya Purana, "From the forehead of Durga, creased with wrathful frowns sprang forth a goddess of black and formidable aspect, armed with scimitar and noose and bearing a mace, decorated with a garland of skulls".