Barber Father Learns About A Cure For His Son's Disease From YouTube, Looks To The Crowd For Help | Milaap

N
You are sending a message to
Nipul
Go back

Barber Father Learns About A Cure For His Son's Disease From YouTube, Looks To The Crowd For Help

By Athira
21 June, 2016
Shares
Share on Whatsapp
A barber in a salon in Mumbai, Nipul Solanki's life took a tragic turn when he found out his 6-month-old baby son was suffering from Thalassemia, a blood disease which became so severe that he needed regular blood transfusions to survive.As any parent who cannot see their child suffer, Nipul started looking for solutions. With just 9th grade education, this father took his friends help to look for doctors and to find a cure. With much difficulty, he found out a solution that will save his son. But when he found a solution, he was left with nothing to pay for it and save his son. 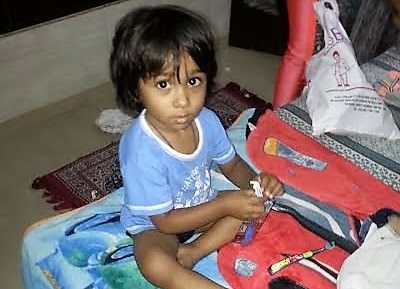 Due To Financial Difficulty, Raghav Did Not Get Proper Treatment and His Condition Became Risky

Nipul and his wife Falguni found out that Raghav, their 6-month-old baby was suffering from Thalassemia Major after a blood test. Since he turned 6 months old, he was having  a recurring fever and it was when medications failed that they went ahead with a blood test as per the doctor's advice. Two months of sadness, helplessness and ignorance passed by. Nipul realised his son would die if he does not get proper treatment.

Nipul works as a barber in a salon in Mumbai. His wife was a home maker. When Raghav's treatment expenses increased, Falguni, who completed a beautician course started looking for jobs in beauty salons. With help from friends and relatives they continued Raghav's treatment till now. Now Raghav is 4 years old and still lives with the support of blood transfusions.

With No Knowledge Of English, Nipul Took His Friends Help To Translate Information About His Son's Cure

After 3 years of watching Raghav undergo blood transfusions, Nipul decided that he needs to do something for his son. Few of his friends suggested an alternative therapy.

"Since I had no clue of the treatment methods, I got carried away with the first suggestion. We went ahead with a painful therapy. Later I realised it is dangerous. From this experience, I decided I should learn more about my son's disease. I didn't know what Thalassemia meant. I took help from my friends. One of them suggested I search through YouTube. For a person who has just seen computer and not used, how will YouTube make sense. So I asked him to show what it is. With my friend's help in translating English videos by doctors and watching some Hindi explanations for Thalassemia and it's cure, I understood that a bone marrow transplant is done as a permanent cure. 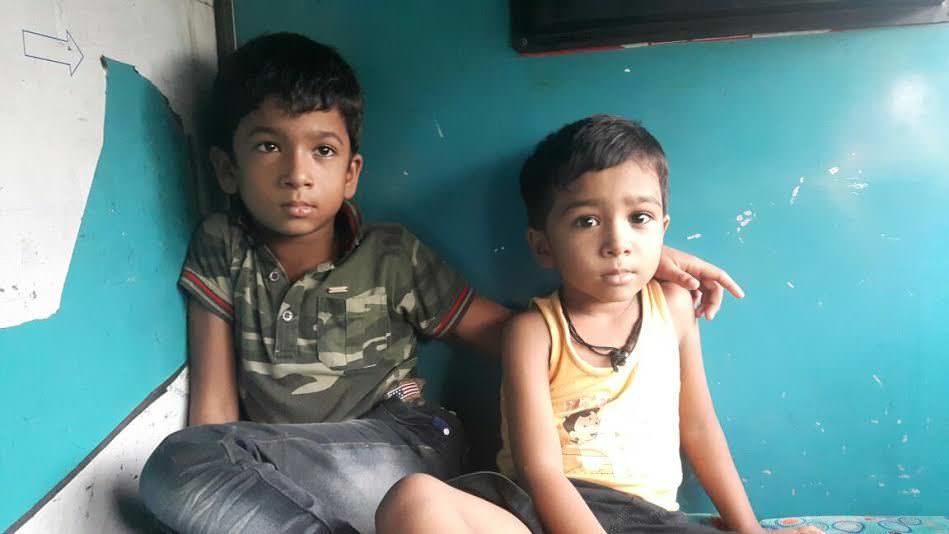 It brought a great relief to Nipul and Falguni that their elder son was a matched donor for the bone marrow transplant. This meant that Raghav can undergo the transplant as soon as they arrange the funds.  7-Year-old Jenil did not know what it meant to be the donor for his brother's transplant. All he knew was that his brother cried out in fear when a nurse pressed the needle into his hand. When Nipul asked Jenil whether he is ready to help Raghav, so he need not get injections every month, he quickly said a loud 'yes'. A slight shadow of fear crossed his face. Perhaps he thought "What if they give me injections too" . But his father has told that he is a brave boy. I know my son is brave even though he is small. From the day I told him that he will help Raghav stay alive, he never leaves his brother's side during blood transfusions.

The family is need of 15-17 lakhs for the transplant and hospital expenses. A little support from us can ensure that Raghav does not have to go through these painful blood transfusions anymore. He would be able to live a normal life again.

Raghav can undergo a bone marrow transplant with our support. If he goes for transplant on time, he has a good chance of recovering. Since his brother is the donor, he can undergo the transplant when the required funds for the transplant are arranged. Funds raised will be utilized for his transplant. Please make a small contribution to help this desperate father save his little Son. 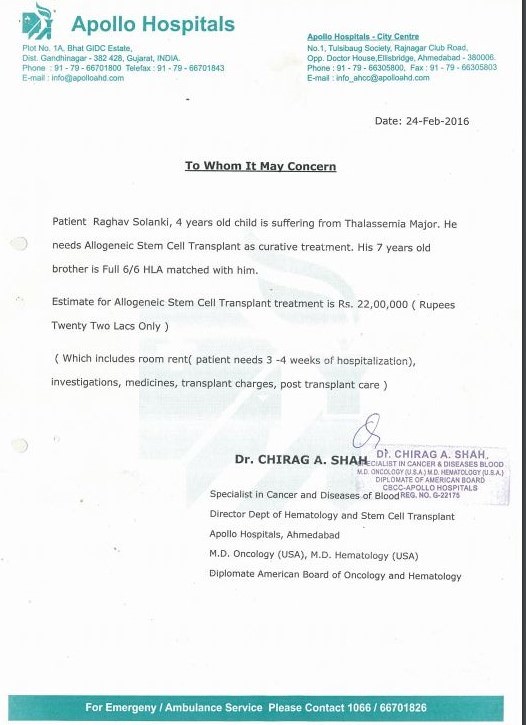