Priya's family built most of a toilet, but missed one key compenent | Milaap

Priya's family built most of a toilet, but missed one key compenent

Shares
Shares
Share on whatsapp
When I met Priya she was 8-months pregnant. She lives in the village of Muthaiyanallur, which is home to about 100 families. “Most of the men in the village work as agricultural laborers, and most households do not have toilets,” she said. Priya’s husband is a milkman who wakes up at about 3am to go to work in the morning. When I arrived at Priya’s house around noon, her husband was home for his lunch break. He is deaf and mute, but that sure doesn’t stop him from smiling.
Priya looked like she might topple over from the weight of the baby, so we sat down to talk. She told me that it is customary for pregnant women to leave their husbands house for their parents’ house when they are seven months pregnant, but she decided to stay with her husband he struggles to get by without her help. She said that she got the loan six months ago, and that her family has started the construction of the toilet. I asked her how much they had spent so far, so she made a few hand signals to her husband. It was fascinating to watch them communicate, although she said that only her husband’s elder brother knew the cost of the toilet.
After talking for a while in the shade, Priya walked me over to the toilet. There were two rooms, a bathroom and a room with the toilet. Although the toilet was finished, they had ordered the wrong size door, so were waiting to buy one that fit the doorframe. In the mean time, the toilet was being used for storage. It was frustrating to see a family so close to having built a functional toilet, especially when the group leader (Priya) was a motivated 21-year-old woman. Although I’m sure that her family will be preoccupied with its newest addition for the next few months, hopefully they will get a new door and make use of their toilet soon. 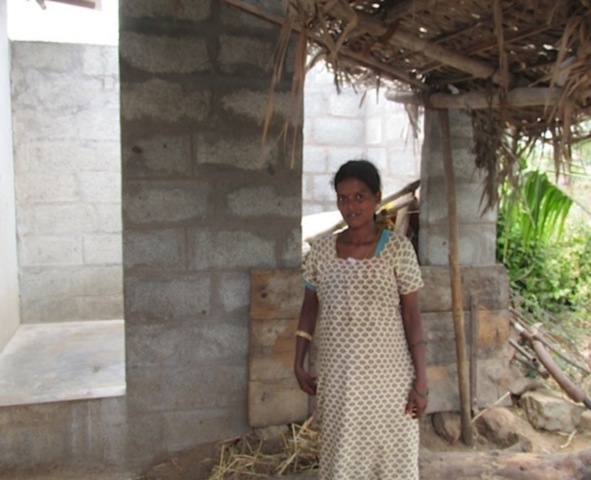 Priya outside of her toilet