16-Year-Old Pritam Had To Drop Out Of School To Battle His Cancer | Milaap
loans added to your basket
Total : 0
Pay Now

"My son has complete faith in me. He is counting on me to save him, to get him out of this world of pain and suffering. But little does he know how helpless his parents feel, knowing that they do not have the resources required to save their son's life," says Pritam's mother.

Pritam with his mother

To be 16-years-old is exciting. You decide what you want to study, choose a career and work towards it. But 16-year-old Pritam spends most of his time on a hospital bed, battling a disease hellbent on killing him.

A few months back, Pritam was diagnosed with Hodgkin's Lymphoma, a severe type of fast-growing cancer. While undergoing treatment, Pritam parents are finding it difficult to arrange enough money to complete his treatment.

Forced To Give Up On Dreams

Pritam's father Sanjib (50) is a daily-wage laborer who sometimes make up to Rs 150 a day. His mother, Chandana (37) is a housewife. He also has an 18-year-old elder sister, Anamika who is studying in class 12.

"My daughter is refusing to appear for her board exams given her brother's critical condition. She is just not able to focus on her studies. She is so worried about her brother and he is worried about her. Every time he speaks to her, he tries his best to convince Anamika to concentrate on her studies. He does not want his sister to give up on her dreams and ambition only because he is sick," says Sanjib.

Anamika is not the only who had to put her life on hold. Pritam, a class 10 student himself, too had to drop out of school to battle his cancer. While all his friends successfully complete school, he will have to go back when he is better.


"He is such a bright student, good in studies and a favorite among his teachers. We still get calls from his classmates, asking me if he is well enough to be back in school. How do I tell them that I have no idea if he will be back? How do I tell them that his father is so poor that he cannot even arrange money that is the only thing that will save his son's life?"

Despite not having the means, the family has done everything to arrange for the funds required for their son's chemotherapy. The estimated cost of entire treatment is Rs 2 lakhs, with the duration ranging from 6-8 months. Only after the last chemotherapy will the doctors be able to decide a future course of action. As of now, Pritam is responding well to the treatment but money remains the biggest hurdle.


"I sold my house and got Rs 2 lakhs for it. I have exhausted the entire amount so far. Now I have no means to arrange for the funds. With so much back and forth between my hometown and Bangalore, I am not even able to take on any jobs. We are at the mercy of fate," says Sanjib.

Pritam is only 16-year-old and has his entire life in front of him. His cancer is threatening to take it all away. Even after selling their house, his parents have hardly have anything left for future treatment. They don't even have funds to ensure proper schooling for their children. At this point, it is extremely urgent for Pritam to complete all chemotherapy sessions. Your contributions can help Pritam live. 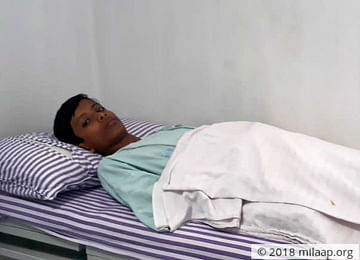 Pritam's cancer destroys the immune system. Chemo is his only chance. Help his parents save him.