Shares
Shares
Share on whatsapp
I went to meet Chandra, but since she wasn't there, I met another borrower from the group, Theivasakthi. When I met Theivasakthi she was sitting on the road outside of her house with a woman that looked roughly her age and two young girls. One girl was sitting on Theivasakthi’s lap, and the other was running up and down the street playing. When Theivasakthi saw me, she shooed the girl out of her lap as she stood up and insisted that I sit in the lone chair in the road.
After the young girl returned to Theivasakthi’s lap, we talked for a while in the street. I found out that her new water spigot is connected to ‘Cauvery water’, which is water sourced from the nearby Cauvery River and supplied by the regional government. You can recognize the stores of Cauvery water in the rural areas surrounding Trichy, as it is kept in large above ground tanks painted green and white. There is also a street tap that provides Cauvery water, but it would not always meet her family’s water needs. Theivasakthi also told me that there is well water about fifty meters from her house that she would use when she couldn’t get enough from the Cauvery water supply. However, the well water is pumped using electricity, and at the time of her water connection installation the well did not regularly produce enough water due to power cuts and electrical problems. About 500 meters away there is a hand-pump that she can use anytime, but she avoided the long walk unless her family really needed water.
Theivasakthi showed me her water connection, which seems very happy with. She gets water daily, and has no problems getting enough water. Her connection is located next to an immense bundle of hay, which is food for their calf. I never figured out if the girl that she was holding was her granddaughter or not; it is difficult to tell whose children belong to who in rural villages where children held by many members of the community. As I left, the two girls waved goodbye to me until they disappeared from sight. 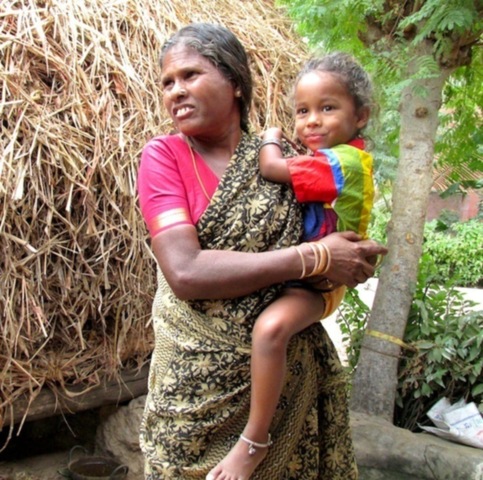