"Normally, we dread the hot sunlight, now it can be used for something else." | Milaap

"Normally, we dread the hot sunlight, now it can be used for something else."

It was a blisteringly hot Monday morning when I left Kolkata for Dakshin Barasat, in West Bengal. The 6 a.m. train was luckily quite empty and I was able to sprawl out and take an hour’s nap before I reached my destination. Today, once more, I would be traveling out to a smaller village called Dhosa where DCBS had a branch office. I met up with Shaymal, the local branch manager, and together, we cycled our way to the house of Rehena Mandal, a woman who has been associated with DCBS for the last three years.

By the time we reached Rehena's home, all the other ladies in the group were already seated with their loan booklets and chatting amongst themselves. I found out that group leader Rahima Molla was out of town visiting with relatives in Bihar, so I, instead, chatted with the rest of the ladies. They were all discussing their children's exams that were going on that week. It seemed like they were all genuinely concerned with their children's education. Many of the women told me that they want their sons and daughters to be able to get good jobs away from the village.

Most of the ladies here did custom embroidery work on saris to earn extra income for their families. Rehena, who goes by the nickname Tinku, mentioned that lately, it was getting harder to live solely off their husbands’ incomes, and that the husbands themselves were encouraging them to take up tailoring and needlework to make a little extra money. For me, it was great to hear that the men were supporting their wives’ endeavors, because traditional Indian culture has always frowned on women earning their own incomes.

We then started talking about the solar loans that the majority of the women in this group had received. There was bad news from one lady who told me lantern had stopped working properly. Luckily for her, the lanterns come with a 2 year warranty which will replace her broken one. The other ladies in the group were all very pleased with the solar lanterns they had received. They all seemed to like the idea of solar energy because, "Normally, we dread the bright hot sunlight, but now it can be used for something else," Tinku explained. Tinku and the rest of the ladies were very grateful for the support they received from Milaap and DCBS, and are looking forward to the day when all their power needs can be met using solar energy. 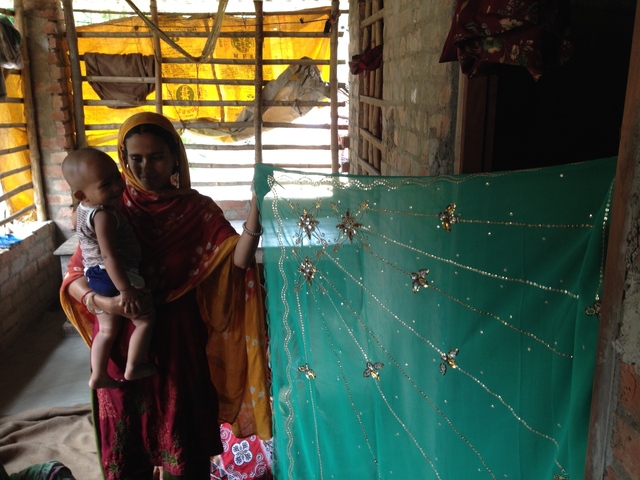 Tinku displays the sari she's working on as her baby girl giggles away.