Help 2-Year-Old Nivedh In Hearing The Beautiful Sound Of The World | Milaap
loans added to your basket
Total : 0
Pay Now

You are sending a message to
Priya Channa
Go back

Shares
Shares
Share on whatsapp
My name is Priya. Mohit and I got married in 2014. We had every reason to be happy when we were gifted with a small baby after a year. We felt complete. Things turned upside down when we realized that our child, Nivedh was suffering from hearing loss. He now needs to urgently undergo a cochlear implant, to have a normal life.

Nivedh responded to only sounds made by vessels

When Nivedh was born on 12th November 2015, he was a premature baby of 7 and a half months. He initially had complications since he was extremely underweight. But never did we feel that he was unable to hear us!

Until December 2016, Nivedh did not utter a single word. We thought he would eventually pick up as most children have speech delay. When we made sound, we thought Nivedh was responding well. But only after his nani made a detailed observation, we realized that 8 out of 10 times, Nivedh was not responding. After monitoring thoroughly, we discovered that he would not even look back at sounds made by vessels.

On 7th March, when things already were complicated, we rushed to the local ENT. I was extremely scared. I took Nivedh to a hearing test center in Lucknow. After undergoing the ASSR hearing loss test, it was confirmed that my child was suffering from a serious hearing issue. I could not believe it. Although the doctors suggested undergoing a cochlear implant at the earliest, I refused to take any action. Mohit and I Went to AIIMS, Delhi for a second opinion, only to prove that nothing of this sort has happened to Nivedh. But the doctors there too recommended for an implant.


“When doctors from both the hospital advised for an implant, I did not want to delay at all. I wanted Nivedh to get well soon and that’s all kept me moving. Although the expense of the treatment was huge, I have given all my savings to bring happiness to my child’s face. Nivedh successfully underwent the basic implant in last April. And ever since he has shown rays of improvement. He has started picking up basic Hindi words and has even started repeating after me”, says the happy father.

Another implant is the ray of hope

Now, the biggest challenge is that Nivedh needs to have another implant by February 2018 to be perfectly alright. When the doctors gave me hope that he would absolutely become like a child of his age, what more could I ask for? However, Dr. Isha has advised me not delay this process, since that might again affect his brain adaptability. A normal child has been hearing sounds from his 1st day. Nivedh has been hearing only for the last couple of months.

Mohit works in a private company, while Priya is a housewife. The couple has exhausted all their savings for the treatment, and now they are seeking for help to continue their 2-year-old son’s treatment. 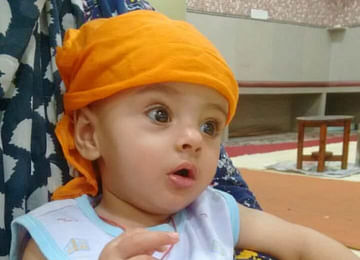 Help Nivedh In Hearing The Beautiful Sound Of The World

Nivedh was born with a profound hearing loss and needs your help for a cochlear implant surgery.