After Getting Hit By A Drunk Driver, These Two Young Men Are Fighting For Their Lives In The ICU | Milaap
loans added to your basket
Total : 0
Pay Now

After Getting Hit By A Drunk Driver, These Two Young Men Are Fighting For Their Lives In The ICU

“They were hit so hard from behind that, Mujtaba (one of the victims), flew and landed approximately 25 feet away from the spot. People came out of their homes, as they were very terrified.” – Zulfekar, Ata Jafari’s (the second victim) brother-in-law.

Being hit by a drunk driver in a 4-wheeler, two friends, Mujtaba Hassan and Ata Jafari, aged 25 and 24 respectively, are now extremely critical in a hospital in Nagpur. Suffering the consequences of someone else’s wrongdoings, both have been in the ICU since February 24, 2018, and have no other option but to remain there. Both their fathers are auto-rickshaw drivers and have nothing left to continue their sons’ life-saving treatments.


Ata is fighting for his life in the ICU

Victims of a major drunk-driving accident

Mujtaba and Ata were returning home at around 10 pm in the night from a friend’s wedding. Out of nowhere, an SUV rammed into the two friends and completely smashed their bike, leaving them severely bruised and unconscious with head injuries.The driver was very drunk and hit two other auto rickshaws as well.


Mujtaba is under life support

“The two were terribly bruised and unconscious. Mujtaba landed so far away that he was in the dark for almost 15-20 minutes before someone noticed him. Ata’s condition is critical but Mujtaba is very critical right now.”- Zulfekar, Ata’s brother-in-law

“None of the parents are in a state to talk. When Ata’s father walked into the hospital, he started crying so loudly. It was hard to bring him under control. It’s been 18 days, and both are still in the ICU and haven’t gained consciousness. Mujtaba has undergone a brain surgery too.” – Zulfekar

Ata has a traumatic brain injury

Ata is suffering from a traumatic brain injury and still critical. He needs to stay in the ICU to recover. He has a lot of clots in his chest which has even made it hard for him to breathe. The injury was so brutal that it has even collapsed one his lungs. He has several physical bruises all over his body and his ribs are severely damaged too.


Their bike was smashed and the two are lucky to survive

Mujtaba, on the other hand, is still very serious. Battling for his life, Mujtaba has been in the ICU on the ventilator for life-support since he was brought into the hospital. He’s undergone a brain surgery because his brain was horribly swollen due to the collision. He too, is suffering from a traumatic brain injury and is very critical right now. Unquestionably, he needs to remain in the ICU under life-support.

Mujtaba and Ata were just beginning their careers

Ata and Mujtaba’s parents are in dire need of help

Ata’s father, Mustafa, and Mujtaba’s father, Asif, both, are auto-rickshaw drivers earning a meagre sum every month. They’re friends too and have been absolutely devastated ever since the accident. Ata’s and Mujtaba’s parents are extremely poor, and have no means to keep their children in the ICU. Their sons need to remain in the ICU and they’re running out of time to help save their lives.

Ata’s and Mujtaba’s community friend, Abid Raza is trying his best to arrange funds to help them. Until now, a total of around Rs 6 lakhs have been provided for their treatments. Mustafa and Asif Ali, together, could only provide around Rs. 1 lakh after exhausting all their savings and borrowing from their relatives. The total cost for each of the 2 victims are said to be around Rs 4.5 lakhs, thus, the total estimate being Rs 9 lakhs. Even with help, they are still running out of funds and time to save Ata and Mujtaba’s lives.

Mujtaba and Ata Jafari are victims of a major accident where they were hit by a drunk driving an SUV. They’re both suffering from traumatic brain injuries along with several other injuries throughout their body. They need to remain in the ICU to continue the life-saving treatments they need but their families are very poor and have nothing left to save them. Now, they need your help to save their lives.

Your support will save 24-year-old Ata and 25-year-old Mujtaba. 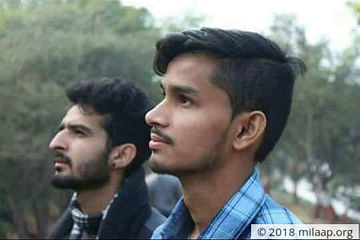 Help Save Ata and Mujtaba Who Met With A Tragic Accident

Ata and Mujtaba need your support to stay in the ICU longer to survive.