Monsuri No More Needs A Kerosene Lamp. Milaap Has Given Her Something Better! | Milaap

Monsuri No More Needs A Kerosene Lamp. Milaap Has Given Her Something Better!

Shares
Shares
Share on whatsapp
Mariom Laskar, the Group Leader for this Borrowing Group, was not available for an interview when I visited her group during their group meeting on 3rd March, 2014. However, I was able to get an interesting impact assessment from Monsuri, who was one of the members of the group.
Not so long ago, uninterrupted lighting at night was a ‘forbidden luxury’ for many women in rural West Bengal. This was particularly the case in Monsuri Laskar’s home. Although she was connected to the electric grid, they always faced 1 to 2 hour-long power cuts every night. Unlike most Milaap borrowers in the region, she does not even own a kerosene lamp, which is usually the primary lighting substitute for electricity. This has been a major hindrance in increasing her productivity in tailoring clothes at night, a profession that she has been pursuing for the past 10 years. After all, she finds it impossible to work in complete darkness. 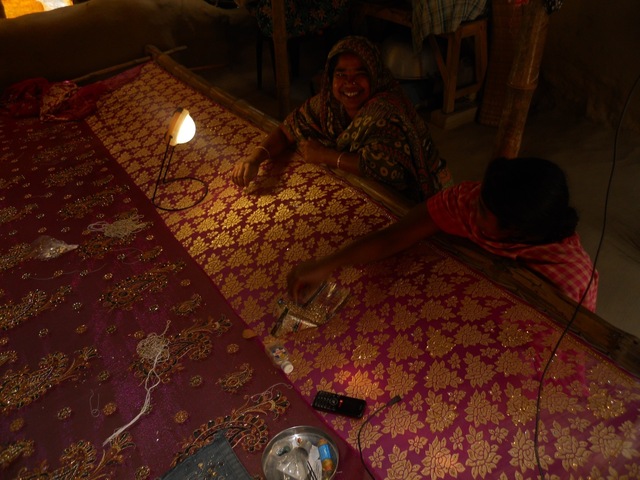 Realizing that she needed lighting to improve their business productivity at night, Monsuri decided to purchase a solar lamp for her home. About a year ago, she joined a group of women neighbors in her village of Paschim Chak Pach Gora. This group collectively borrowed a loan from Milaap to purchase solar lamps.
In Monsuri’s case, she feels that her solar lamp has been phenomenal in improving her and her family’s lives. Monsuri can now tailor more clothes at night, when she is working at home. She now earns more money. Her average monthly income has increased by Rs.500, from Rs.6500 to Rs.7000.
Further, out of her 4 children, Monsuri’s 12-year-old daughter has benefited much from the third lamp being used at home. Being a 6th Standard Class school student, she has been grateful for the studying under lamp. Monsuri, on the other hand, uses the lamp while cooking for her family. None of this would have been possible during power cuts before Monsuri approached Milaap.
[stag_button url="https://milaap.org/fund/west-bengal" style="red" size="small" type="normal" target="_self" icon="" icon_order="before"]She Is Grateful To You[/stag_button]