4-year-old Momin Talks About Himself In The Past As If His Life Is Already Over | Milaap
loans added to your basket
Total : 0
Pay Now

SW
You are sending a message to
Sunny W
Go back

Shares
Shares
Share on whatsapp
Momin's parents find it unsettling when their 4-year-old talks about himself in the past. Momin often says that he is no longer 'good' like he used to be before. He knows the normal joys of going to school like other children his age is not for him. To become all right again, Momin needs to fight off blood cancer.


Momin with his parents

Momin has been fighting cancer for over a year

Momin fell sick shortly after his sister was born. He developed a high fever did not go down even after taking medicines. His father rushed him to Nashik from his village. Instead of celebrating the arrival of a new baby, Momin's parents were told that their son had an aggressive cancer that would kill him if not treated.

Since then, Momin has been taking intensive chemotherapy to push back cancer. Momin is now 4-year-old and full of a terrible knowledge – what it means to be fighting a fast spreading cancer. It has not been an easy journey for him or his parents.


“He is fine at the moment but after a few days, he falls sick again. My child has suffered a lot – he had sores, bleeding, lost weight and then gained too much weight. He used to cry a lot every time they put a needle in him, but now he tells us that it is to make him good again,” explains Ashfak, Momin's father.

Ashfak needs to take Momin to the hospital in Nashik once in two weeks for his treatment. With the typical resilience of children, Momin has managed to stay strong through the treatment. It is his parents who are most worried that cancer might snatch away their precious child.


Momin's parents never anticipated that treating cancer would be this hard

Treating Momin has become impossible for his parents

When Momin's cancer was diagnosed, his father's first thought was – 'Can we afford this treatment?' But unwilling to give up on his first child, he decided to make arrangements for the treatment. He went and asked every one he knew in his village and in his family for help.


“At first we didn't want to believe it was cancer, so we got him tested again and again in different hospitals. Then the treatment itself is very expensive. Somehow, my friends and family helped me and I kept my child alive. But now, there is no one else to ask for help but God. I am praying for any help that will let me save my innocent child,” says Ashfak.

Ashfak is a daily-wage worker in a power loom warehouse. He earns Rs 1,000-1,500 every week depending on how much electricity is available. While it was not much, before Momin's cancer, they never felt so pitiably poor.

Ashfak has managed to keep Momin's treatment going with a lot of loans. All his resources are exhausted and he needs help saving his child's life. Poverty should not be the reason an innocent, sweet child loses in his fight against cancer.

Your contribution will save Momin and help him fight blood cancer. 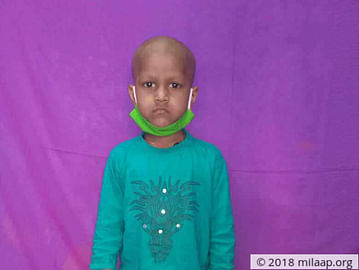 Little Momin has been fighting cancer for the last one year and his parents need help saving him.