“After his blood transfusion, we always ask him how he’s feeling, and he replies with a thumbs up. We felt a bit better after that. Now, however, he tells us that he feels extremely tired. That scares me the most. While his mind is strong, his body seems to be giving up. I feel like I’m losing a little bit of my son every day,” says Sujathullah, Owais's father.

Owais has a life-threatening blood disorder that is slowly damaging his vital organs. He needs to undergo a bone marrow transplant at the earliest to survive. If delayed, Owais might not make it to his eighth birthday next year.

Owais has stopped growing because of his disorder

Mohammed Owais has been diagnosed with a serious blood disorder called Fanconi’s Anemia, a condition in which the production of blood cells stops in the body. 7-year-old Owais weighs less than his younger sister who is only 3-years-old. He is also the same height as her. He hasn’t gained weight or grown in the last 2 years. His worried father took him to doctor when he noticed that Owais’s skin had turned almost yellow and he had black patches all over his body.

“He had been sick for 3 months before we noticed the symptoms. Then, I went from one hospital to another, desperately trying to find a solution to his pain, but no one was able to tell me why my son had become so weak suddenly. Finally, in October last year, we took him to Narayana Hrudayalaya, where they told us what he had.”

Owais and his sister

Owais was started on blood transfusion immediately. While earlier he used to get it every month, the frequency of the transfusions has increased now. This has created excess iron in his body which is damaging his organs.


Owais with his father

Once full of energy, he can’t even walk on his own now

Owais used to be an active and cheerful boy, who was always excited to go to school. When he was at home, he would run around playing with his younger sister or would cycle outside. Unfortunately, after his diagnosis, he had to quit school because of the frequent hospital visits and is high vulnerability to infections. Owais is unable to even walk on his own anymore, let alone run or cycle like before.

“He hasn’t gone to school in a year. His teachers were very fond of him, and even came to visit him at the hospital. Owais has changed a lot in this time. His body can’t keep up with his active mind, and that makes him very sad. Even five minutes of walking makes his heart beat very fast. We hold him tight when this happens to comfort him because he’s so scared.”

The Owais his family once knew is slowly disappearing. He can’t play, eat or even sleep anymore. He is restless and in excruciating pain all day. The only cure for his condition now is a bone-marrow transplant.

Owais is racing against time

Sujathullah and his wife were disheartened when they found out that they were not a match to be a stem-cell donor for their son. Owais’s sisters are also not a match. Just when Shujathullah thought all hope was lost, the doctors told him they could do the transplant with both the parents being 50% donors each.


Owais with his sisters

“The doctors told us that there’s no time to wait for a full donor. This is the best chance that Owais has. We were relieved that we could save our son before it was too late, but they told us that it would cost 35 lakhs to get the transplant done. We don’t have that kind of money.”

Sujathullah has already spent Rs 4 lakhs on his son’s treatment so far. He runs a shop where he sells aquariums, and the family was getting by with his earnings. However, the amount of the transplant is too high for him. He also doesn't have time to arrange for loans. With Owais’s continued transfusions, tests and now the bone marrow transplant, all doors are closing for Sujathullah.


Owais with his mother. Owais needs the bone marrow transplant before he runs out of time.

Sujathullah is struggling to save his son from a severe blood disorder that is making him weaker by the day. Owais needs to have a bone-marrow transplant at the earliest to live. He needs Rs 35 lakhs to have the surgery and get healthy again.

Your support will save Owais and give him life again. 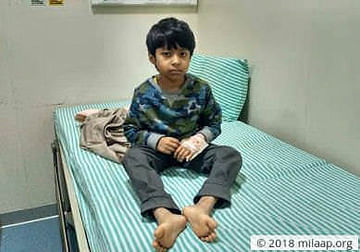 Owais needs a bone marrow transplant to live. Your support will save him.