School Teacher's Daughter With 2 Massive Holes In Her Heart Has Little Time To Get A Life-saving Surgery | Milaap
loans added to your basket
Total : 0
Pay Now

“Bhavya is just 3 years old. She has not had a good night’s sleep ever since her birth. Every night she complains of acute pain in her hands and legs. When she was less than a week old, she had to spend 20 days in the ICU. My little girl has two big holes in heart and only a surgery can help her live. We thought that she had recovered, and now we are racing to save her again.“ - Subba Rao, Bhavya’s Father.

It all began 5 days after her birth. Bhavya started experiencing vomiting incessantly while her mother, Anjali, was in the hospital recovering from C-section. The doctor examined her condition and recommended scans and tests. The little girl had to begin her fight with death in less than a week since her birth. Her heart has two massive holes. The results confirmed the presence of Ventricular Septal Defect (VSD), with Anomalous Left Upper pulmonary Vein drainage. This means that her heart mixes up good and bad blood, making it hard for her to breathe as well as digest food.


Her lungs could fail if they lose time in getting help

It took a while for this little girl's condition to stabilize. Medications were supposed to control symptoms, while they waited for her heart to heal on its own. For a while, she seemed normal until the symptoms came back worse than before. On a followup appointment, the family discovered that the holes in Bhavya's heart were growing bigger. She also had abnormal blood pressure to the lungs, and due to this, her lungs may collapse before her heart does.

“On hearing the news, my wife collapsed in shock and fell down from the bed. Fortunately, she escaped injuries with the help of people in the ward. We wanted see Bhavya giggle but she struggled to breathe. She couldn't have milk. Medicines meant she could prolong her efforts to fight the problem."

Every time the girl sees kids of her age with bags she asks her father when she can go to school. While the little girl aspires to be a student in her father’s classroom, she can barely stand for 5 minutes without experiencing pain in her legs. Bhavya's brother, Srinath (5) does not know what his sister is going through, but asks his father why she falls sick so often. He wants to know why he can’t play with her.

Earning barely enough to pay his son’s school fee and keep the household running, the medical expenses have come to mean that Subba Rao is steeped in debt. Having spent more than 4 Lakhs so far, the only resolve he has is his family’s moral support. Without an immediate surgery, that will fail. He needs 3 Lakhs to help his little daughter overcome the fatal heart condition.

Your support can help this family to save the three-year-old from the fatal condition and fulfill her dream of going to school. 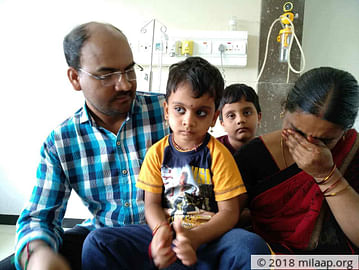 He Lights Up So Many Young Lives, Help Him Save His Own Little One

This father is drowning in debt, and needs Rs. 3 lakhs to save his little girl from heart failure.