7-Year-Old Aditya Should Have Been In School Instead Of A Cancer Ward Struggling To Survive | Milaap
loans added to your basket
Total : 0
Pay Now

Shares
Shares
Share on whatsapp
As long as his parents have had him, 7-year-old Aditya has been fighting cancer. At an age when he should be in school, playing happily with his friends, Aditya spends most of his days on a hospital bed, enduring terrible complications and side-effects from the aggressive chemotherapy he gets.


"We first got to know about his cancer when he was under 3-years old. He had a fever and we took him to the doctor. After the tests, we were advised to take him for a biopsy. The result of that test report changed our lives," said Aditya's father, Bhagchand.

The test reports confirmed that Aditya had a severe fast-spreading blood cancer. After his diagnosis 2014, Aditya was put on chemotherapy for the next few months.

After months of suffering and seeing their child live with the painful side effects of treatment, the family finally got some good news. Aditya was free of cancer and could finally look forward to a better life. But just when he had started to recover from the ordeal of the earlier treatment, his cancer came back, worse than before.


"His symptoms became more severe than before. Most days, he could hardly get out of bed. That's when we decided to finally go to Mumbai from our town Jabalpur. We took him to Tata Memorial Hospital, but were rejected treatment," says Bhagchand.

"Should have come to Mumbai for treatment the first time"

After being refused treatment in Tata Memorial Hospital, Bhagchand took his son back home. He decided to give hospitals in Jabalpur another chance and hoped that his son would get better. But as luck would have it, nothing positive came out of it.


"I had no money so I took him back to Jabalpur. I was already broken and beyond hope after I learnt that he had cancer again. When a friend suggested getting treatment in Jabalpur, I thought it made sense. It was the worst decision of my life. The hospital there admitted Aditya for a month, emptied our bank account and then told us they could do nothing else. They just abandoned us to our fate. How can a father see his son die in front of his eyes? I had no other option than to bring him back to Mumbai."

Aditya started his treatment again at Wadia Hospital, Mumbai. As of now, he has been asked to take 12 cycles of chemotherapy, with the majority of them being high-risk chemotherapy. He's completed 9 cycles. Further course of the treatment will be decided by doctors once the entire course is over. So far, Aditya is showing positive signs of recovery.

Aditya parents, Bhagchand and Sashi are from Jabalpur, Madhya Pradesh. Bhagchand is a daily wage laborer and owing to his son's condition, he hasn't been able to work since July 2017. Sashi is a housewife. They live with Aditya's grandmother.


"There hasn't been any income for past 6-7 months. Aditya's 9-year-old brother Praveen had to leave school and come to Mumbai because we couldn't leave him alone this long. Everything is so expensive in Mumbai. We live in a rented apartment and have to pay a lot for every meal. Whatever little we manage to borrow is gone in just arranging food. How do we save our son now?"

The family has already spent close to Rs 5 lakh towards Aditya's treatment. They need another Rs 5 lakhs. Without the funds, they will be left with no other option but to take their child home to a certain painful demise.

Aditya is only 7-years-old but suffering for so many years has taken away his childhood. His parents are desperate to save their youngest child but having spent all their life savings over the last four years, they have nothing left. Your contribution can help Aditya live. 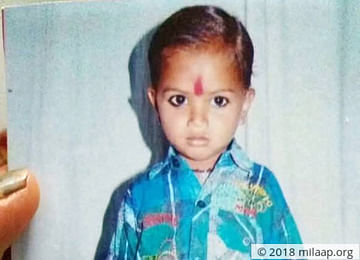 Aditya has been fighting cancer for the last 4 years. Even the smallest contribution will help him.