You are sending a message to
aram
Go back

Support Manoj Mishra in His Fight Against Blood Cancer

Ram Pandey is often seen in a melancholic mood. Usually cheerful, he's being weighed down by  one particular topic of worry nowadays. His cousin, Manoj, is fighting blood cancer and his family is facing a financial crunch required for Manoj's treatment.

Extremely popular in his village

Manoj Mishra is extremely popular in his village of Basti, Uttar Pradesh. His easy smile and cheerful personality made him extremely liked by everyone in his village. It was his ability to draw people to him effortlessly that led him to landing a job as a motivator for the children in his village. His job involves encouraging the children to go to primary school, and ensuring they receive the education they deserve.

One day in April, when Manoj was out and about, he suddenly started feeling strange. He developed an itch which didn't go away the whole day. However, Manoj didn't think much of it, as he figured it would soon go away on its own. The itching increased the very next day. Manoj decided to visit the primary health centre in his village. He was given some medicines; unfortunately, they were not of much help.

In Lucknow, Manoj checked himself in at a hospital and waited for the doctors to diagnose his condition. After hearing of his symptoms, the doctor in charge of taking care of Manoj suspected cancer. Manoj was again referred to a hospital – this time, he had to get himself checked at the Tata Memorial Hospital in Mumbai. 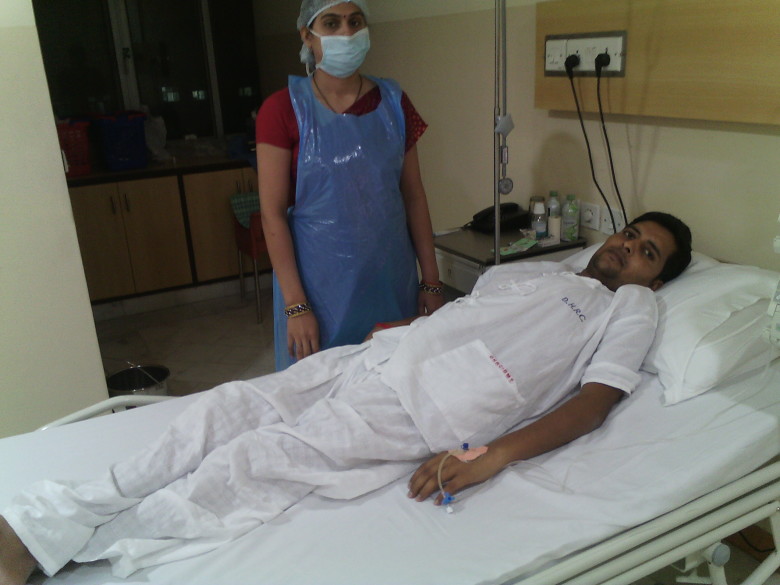 Once he got admitted at the Tata Memorial Hospital, he underwent some tests. The test results were out in a week and delivered a blow to Manoj and his family – he was diagnosed with Chronic myelogenous leukemia (CML), a form of cancer that affects white blood cells. They were soon given more bad news – the treatment required would cost the family Rs. 30-40 lakhs. They couldn't even dream of being able to afford the cost of the treatment. They soon came back to their village in Uttar Pradesh, and tried to look for alternative treatment options.

A couple of weeks after coming back, they were referred to an Ayurvedic doctor. The doctor prescribed some medication for Manoj; however, the medication made his condition worse. The family was now in a desperate situation.

They were then told to approach the media as a means to reach out for help. Manoj and his family approached NDTV to ask for help. One month after they were approached, the news channel  visited Manoj and covered his story. They then appealed for help by providing details for the public to contribute funds for Manoj's treatment. To the family's joy, a sizable sum was collected within one week. They were then able to take Manoj to Mumbai again to begin his treatment.

Unfortunately, Manoj's condition had worsened by now, with a lot of precious time lost. To make matters worse, his family was asked to take him back home just 4-5 days after the treatment had started, as his condition had deteriorated. Someone then recommended that Manoj be admitted to Dharamshila Hospital in New Delhi.

At Dharamshila Hospital, Manoj was told that the only way he could be treated was through a bone marrow transplant. Manoj's mother was a match as a donor for her son. The transplant was soon completed.

While Manoj has received the much needed transplant, the family still needs to settle the hospital dues. They have sold their land and used the donations they have received through kind contributors. They have now run out of money to pay the hospital bills. 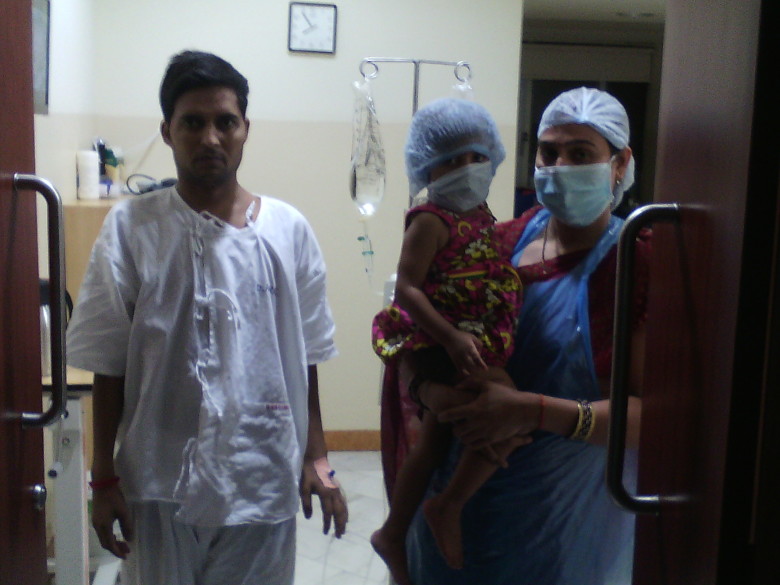 Ram Pandey speaks fondly of his cousin. He says, “Manoj is one of the kindest people you can have the fortune of knowing. He is always there for you. Once, a person in the village received a snake bite and needed to be rushed to the nearest hospital, which is 6 kilometres from Basti. Manoj loaded the person on to a tractor and started driving to the hospital. As luck would have it, the tractor broke down halfway into the journey. Manoj then carried the man and took him to the hospital. This is despite the fact there are barely any pucca roads or electricity on the way to the hospital. That man is alive today because of Manoj.”

How You Can Help?

Manoj and his family are facing a severe financial crisis, and are unable to pay the hospital bills. He was the only earning member of his family. His parents don't work. His wife is a homemaker and his elder son is Std. I, while his daughter is still too young to start school. The family is now turning to you for help with their situation. Contribute a bit and help save Manoj. 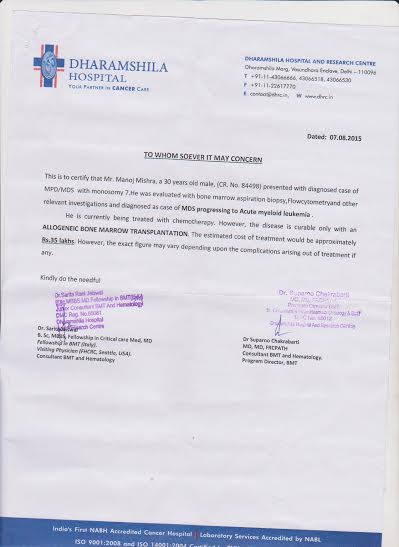 Click here to learn how you can save manoj's life