Help An Illiterate Father Save His Daughter From Acute Liver Failure | Milaap
loans added to your basket
Total : 0
Pay Now

S
You are sending a message to
Sakkarapandiyan
Go back

Help An Illiterate Father Save His Daughter From Acute Liver Failure

Shares
Shares
Share on whatsapp
Miracles have a way of finding people who least expect it. Manju is 17 years old. Her father, Sakkarapandian makes a living by engraving seashells on the beach in Kotarram, Kanyakumari. He makes less than Rs. 300/day, and he discovered that his daughter was dying of acute liver failure.

“I cannot afford doctor fees. If she was born in another home, she may have lived. I’m illiterate and can’t even make a decent living. My daughter will lose her life because I’m not fit to save her!”

From Kanyakumari, this family reached Aster in Kochi

Manju was going to school. She had been sick for many days but had not told her parents. One day at school, she fainted. The family rushed her to the doctor who diagnosed her of jaundice. Within 10-15 days it became clear that what Manju had was liver failure. The local hospital recommended a liver transplant.

“They said she won’t live if we do not agree for the surgery. We had no money. We had given up. A distant relative heard of our plight and came to our aid. A doctor in our town referred us to Aster. It felt like God’s hand was in play.”

Manju did not have any time left

The family had lost so much time already that Manju’s condition had gone beyond critical. The minute she reached Aster in Kochi, her doctor made the decision to take her into surgery. Thankfully, prior workups determined that Sakkarapandian was a perfect match as a donor. If it was not for the surgery, the family would have lost Manju.

“There was no time to even think. Our relative could help us gather Rs. 5.5 lakhs for the surgery. Now, we still have a huge medical bill to cover. Although a lot of people said they would help us, nobody can afford even a lakh. I engrave sea shells and sell them on the beach. How much do you think they cost? There is nothing left after basic expenses.”

Manju and Sakkarapandian are in recovery, but the nightmare is far from over. They must live close to the hospital for 3 months after being discharged for follow-up treatment. This father has now lost his once source of income as well.
It was a miracle that saved Manju’s life. With your support, they can complete treatment and give her a good future.

The specifics of this case have been verified by the medical team at the concerned hospital. For any clarification on the treatment or associated costs, contact the campaign organizer or the medical team.
Click here to save Manju
Donate 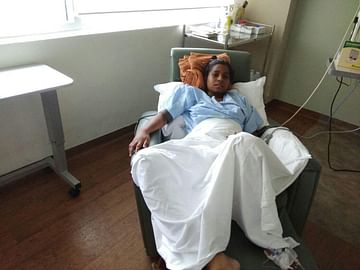