You are sending a message to
Surendra Nath
Go back

Few writers don’t write for fame or success. They write to impact people’s lives through their words. Padma Shri Haldar Nag’s writing is a fitting testament to that.

As Surendra Nath stepped inside the dilapidated structure, which was a home to Haldar Nag and his family, he couldn’t believe his eyes. Sitting in his cramped home in Bargarh district, in Western Orissa, he began to mentally debate if he was the same celebrated poet Haldar Nag, whose interview he had seen on the television a couple of days ago. Donning a white dhoti and an enviable grin, Nag’s modest existence was nothing short of a surprise for him. His eyes then fell on ‘them’ - dozens of awards stacked in neat rows on the floor in one corner of that room.

66-year-old Padma Shri Nag has been felicitated by more than 330 institutions till date. His Kosli language poetry is also the subject of PhD research by five scholars. When Nath, a writer from Cuttack, came across his interview, it urged him to go through his literary work. That’s when he made up his mind to translate his work into more widespread languages so that it could reach a larger audience.

From a Dishwasher to a Critically-Acclaimed Writer: Nag’s Beginnings

Born into poverty, Nag’s childhood has been a series of obstacles. He lost his father when he was 10. He had to take over as the breadwinner of the family. "Life of a widow's child was tough," he said to the Times of India. He took up a job as a dishwasher at a sweet shop.

But two years later, he shifted to a school, where he worked as a cook. He worked there for 16 long years. Later, he took a small loan of Rs 1000 and set up a kiosk in front of a school to sell stationery and eatables to the children.

All along he kept writing folk stories in Kosali, a language spoken in 10 districts of Odisha. There have been times when Nag didn’t get to eat even a single meal a day, but that didn’t deter him in any way. His wife and daughter have been his pillars of strength throughout.

In 1990, when he wrote his first poem 'Dhodo Bargachh', it received a phenomenal response and got published in the local magazine. That motivated him to write more and weave his words, imagination and experience into poetry. He has a series of work to his credit including poetry collection like ‘Bhaab’, ‘Surut’ and more than 20 epics. Sambhalpur University is compiling all of his writings into one book, called the Haldar Granthabali-2, and will use it as part of its syllabus. The university has also honored the poet with the coveted Brahmaputra award. In 2014, Nag was honored by the Odisha Sathiya Academy for his work in development of language.

Giving Voice to the Voiceless Through Poetry

Having won the hearts of people in the rural pockets of Odisha, Nag began to be known as Lok Kabi Ratna.

Nag’s poetry mainly deals with themes such as nature, society, mythology, and religion. Some of his poems speak volumes about the sufferings of people, neglected women and their struggles. Through his poems, he fights for the socially oppressed and exploited.


What makes him an exemplary poet is his ability to recite his poetry from his mind, without having to refer any books.

Nag strongly believes that poetry must have a real-life connection and a message for the people. This man has spent most of his life dealing with crippling poverty. But, nothing has stopped him from writing what he believes in. You can help his literary work reach a larger audience and get the recognition it deserves. Click here to help Nag.
Donate 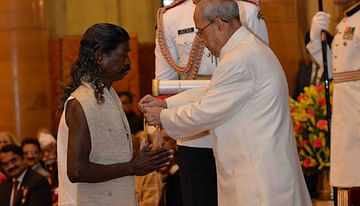