Shares
Shares
Share on whatsapp
On the outside, 8-month-old Kavin looks like any other baby his age. However, a severe heart disease is slowly pushing him closer to his parent’s worst nightmare – losing their only baby forever. Kavin was only 5-days-old when his condition was diagnosed and has been on medication ever since. Unfortunately, now the medicines aren’t enough to keep his little heart beating any longer. Kavin needs an open-heart surgery at the earliest to survive.

Kavin’s heart is not in the usual position on the left chest but is on the right. The two ventricles and valves are reversed making it harder for his heart to pump blood correctly through the body. Kavin also has a hole in his heart. Even with all the complications, there are days when Kavin plays and smiles, but there are also days when his tears are uncontrollable. All Magarasi can do is hold her baby tight and pray that whatever is causing him pain will go away soon.


“The scariest thing about his disease is that there are no visible symptoms. He was diagnosed with the condition when he was only 5-days-old, but to us, and anyone else that sees him, he seems very normal, when actually his life is in danger. When we look at him, we sometimes forget that our little baby is fighting such a big battle. Reality hits us soon enough though when he suddenly starts crying. He’s too small to even tell us if he’s in pain, all he can do is cry.”

Kavin is Margarasi and Ganesan’s only child. While Kavin is unaware of how serious his condition is, his parents live in fear every day. They were shocked when the doctors told them that there so many complications with Kavin’s heart only a few days after his birth. Although terrified, their only aim is to make sure that their baby makes it through this and has a healthy future.


“He had just come into our world, and in a matter of days, we were told that he has a serious disease. The thought of losing him haunts me every day. I can’t leave him alone for even a minute. Even if he sleeps for ten minutes more than he usually does, I panic. I’m scared that anything can happen to him any minute, and if I’m not there to take care of him, I will never forgive myself. The only way we can stop living our life in fear is if he gets the surgery.”

After the news of his baby’s condition, Ganesan tries to work longer hours at the rice mill. However, no matter how hard he tries, the cost for Kavin’s surgery is out of his reach. Magarasi and Ganesan have no other way to give their baby the treatment he needs.


“We can’t lose Kavin. Starting a family was our only dream, and now that’s slipping away. He’s only 8 months old and we’ve seen him go through so much already. We barely have any savings and 6 lakhs is too large an amount for us to afford now. We feel terrible every day that we can’t give our son the one thing that can save his life.”

Kavin needs an open heart surgery at the earliest to survive the severe and complicated heart condition that he’s been living with since he was just 5 days old. Despite Magarasi and Ganesan’s best efforts, they don’t have the means to afford the life-saving surgery for their only child.

Your support can save Kavin’s life. 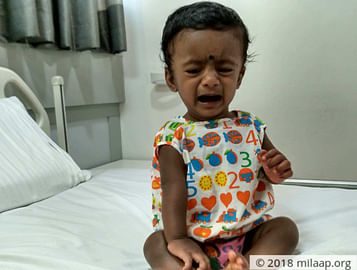 Kavin needs an urgent heart surgery to survive. You can help save her.