Shares
Shares
Share on whatsapp
Jessie has been a fighter all her life. She grew up with limited facilities since her parents had to face a lot of finacial challenges. She managed to get a good education, got a job in a multinational company and worked her way out to support her aging parents. She fell in love with someone who was not from her "cast or community" however he was a lovely person to be around overlooking the objections from communities of her and her husband's side. Then she became a loving and caring mother and paused her flourishing career to take care of her son.

Jessie was raised in a Christian family, the only daughter of Asha and Henry Eyles. She had a normal childhood but always wished to help her parents and improve her family's financial condition. After her college education, She moved to Hyderabad and got a chance to work with Dell and Genpact.There she also met her husband Abdul and they eventually got married in 2012.

"I never thought lumps of milk will cause me breast cancer"

Jessie recalls she had breastfed her son Arshad till he was 3 years old. Once she stopped the milk in her breast started forming as a lump which initially could not feel or identify. This January she felt a pain in her breasts she went to a doctor and it was identified that in the last 5-6 months the lump had turned into a tumor and doctor (gynecologist) suggested that it was due a hormonal change and would be cured through medicines. However, the couple got extremely concerned and got Jessie's biopsy done.

It was identified that tumor had turned malignant and required to be removed, in fact, many of the doctors suggested her to urgently undergo mastectomy.

"I was heartbroken I did not know what to do, I thought how could someone of my age gets breast cancer and I wasn't even sure whether I would survive or not. I thought it was the end of my life"

One of her friends suggested her to Meet Dr M.A. Raja from apollo hospitals.

"I think meeting Dr. Raja was the best thing that happened to me. Dr. Raja built my confidence that this can be cured made me confident to fight this battle, He even suggested to not undergo mastectomy as I was too young to go through the pain of loosing a body part that defines my womanhood. He suggested we would ensure the tumor gets removed through chemotherapy and radiation."

"My child is extremely caring and loving, he understands something is wrong with me. He constantly questions her father as to why am I getting so many injections on my body."

"Since my husband has to go out for work he helps me with the chores. I feel sorry for him since he can't go to school anymore as there is no one to make him ready for the school, I hope I get cured soon so that I may again start dropping him to the school."

Why should you contribute?
Jessie currently requires to undergo chemotherapy and radiotherapy sessions along with that she also needs to get 18 shots of hertrav 440 injections for the next one year, each injection costs 60 thousand.

Jessie's husband Abdul, has already spent 2.5 lakhs however for her treatment requires another 5 lakh.

Your support will help in bringing normalcy back in the family. 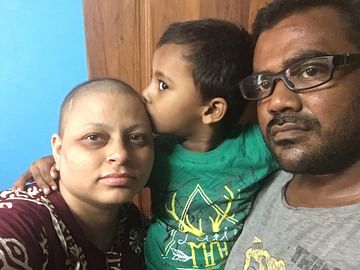 Jessie is a mother of a 3 year old and requires 5 lakhs to get cured of cancer.