It Feels Like Fate Is Playing With Vrushabh's Life And We Are Doing Everything To Save Him | Milaap
loans added to your basket
Total : 0
Pay Now

Shares
Shares
Share on whatsapp
Vrushabh is just 6 years old and yet he is fighting a ruthless, malignant form of cancer. His parents are dreading the growing feeling that their son may not live to see his next birthday as they are unable to afford the treatment that can help him survive. All he needs is a little hope and support to beat this deadly disease.
For Gurudev and Vijaylakshmi, their life in Kaldurgi, Karnataka with their 10-year-old daughter Soujanya and 6-year-old son Vrushabh was perfect. This is all they ever wanted. Financial difficulties existed just like everywhere else, but they never shied away from hard work. Both parents do their best to put their children through school and make ends meet.

“I had no clue life had this in store for us. We are unable to shake the dreaded feeling that previous December might be just have been his last birthday.”

2 months ago, on what seemed like a very normal day, Vrushabh complained of severe pain due to swelling in his mouth. The complications began when he started foaming. Things aggravated and had the parents alarmed when he showed up with a bleeding nose. When they rushed Vrushabh to the local hospital, tests revealed that he had a malignant tumor.
Rhabdomyosarcoma. A tumor that develops from skeletal muscle cells which failed to fully differentiate. Although the tumor on the palate was excised, it was far from a cure. Vrushabh was taken to almost 3-4 hospitals before landing up at Narayana Hrudralaya, Bangalore where the doctors have advised him to go for chemotherapy followed by bone marrow transplant without which he will not survive.
Vrushabh was born on 12th December 2010. By the next few hours, the joy turned to despair and fear for his life. “After being born, my child did not cry”. He was on the ventilator for almost a month. He had a terrible breathing problem.
A month later, Vrushabh fell sick again. He was feverish, weak and kept vomiting. He had a severe leg and back pain. The family took him to a hospital in Solapur to get him operated.

“It was way difficult to see my 1-month-old baby suffer so much. He needed a surgery and we did everything we could to arrange for the funds. We managed to keep our son alive and healthy for so many years.”

The operation was successful. His parents were relieved. Now after six years, Vrushabh has developed a serious health complication. This treatment is Vrushabh’s only chance for survival.
Gurudev is a school master and Vijaylakshmi is a housewife. The father has been struggling hard to arrange money for the child. The previous surgeries have drained them out of all their savings exceeding Rs. 10 Lakhs and now they are at a loss for resources to save Vrushabh.
Your contribution can save him from a terrible fate. He is a brave boy and only needs a little hope and support to make it.
Supporting Documents

Click here to contribute to Vrushabh or for more details on this campaign.
Donate 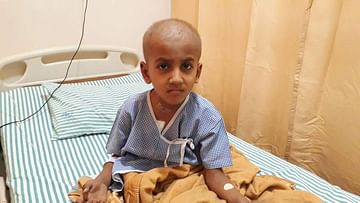 He has had 2 life-saving surgeries before and now he is fighting cancer. Only you can save him.