This Nurse Quit Her Job To Care For Her Only Daughter Who's Completely Bedridden Due To Cancer | Milaap
loans added to your basket
Total : 0
Pay Now

Shares
Shares
Share on whatsapp
14-year-old Varshini is the only child of Kavitha and Simon. Her mother, Kavitha, is a nurse and devoted her life to taking care of sick people. She has been an angel in many people's lives. But now, Kavitha is by her daughter's side in the cancer ward, watching over her day and night. She has forgotten what it feels like to sleep through the night - Varshini needs help turning to another side in bed, and even also in using the toilet. But most importantly, Kavitha wants to make sure that she doesn't cry in silence. The dreadful cancer has made Varshini extremely weak and left her completely bedridden. Her life is confined to the four walls of the hospital, her dreams and hopes are shattering and her body is getting weaker by the day.

After being diagnosed with cancer, she suffered a massive stroke

On July 2018, Varshini had a mild fever but it did not subside for a long time. She was getting extremely weak, and her parents took her to a hospital. She was diagnosed with a B-Cell Acute Lymphoblastic Leukemia, a form of cancer that affects certain cells in the immune system. It starts in the bone marrow and can quickly spread to other parts of the body. The high dosage of chemotherapy has caused a lot of side effects. She suffered a massive stroke and lost movements in her hands and legs. She is completely bedridden now. She is totally dependant on her mother even for the basic activities and requires a wheelchair to move even a few steps.


"She is not able to bear the pain, every day she is given injections and medicines. She feels sad that she has to depend on me even to turn sides on the bed. Doctors have said that it will take 3-6 months for her to walk on her own. She tries her best to cooperate with the rigorous physiotherapy but tiredness sweeps through her and sometimes the pain is just too much for her, she breaks into tears and begs me to take her back home." - Kavitha.

Varshini needs high dosage chemotherapy for 2 years to recover completely from cancer and physiotherapy to get back the movement in her limbs.

Varshini, once an active and a talented girl, struggles to come to terms with her present condition

Kavitha could not lie to Varshini about her medical condition. She being a nurse herself, explained to her about her condition and the medicines that she has to take. Just after her first cycle of chemo, her hair fell out in bunches. Doctors showed her the photos of the patients who had recovered from cancer and pointed out the regrowth of the hair. It was then she agreed to shave her head fully. Besides the physical pain, Varshini also suffers from depression. She is missing her 'old self.'


An old pic of Varshini

"She cries uncontrollably looking at her old photos. She has won many prizes for dance and is also a green belt in Karate. She fears that she may not be able to do all that she likes anymore. She refuses to see anyone. She says, 'I don't want anyone to see me in this condition, this is not me.' She is worried that she'll be missing two years of school. I can't bear to see her suffering from emotional turmoil and physical pain." - Kavitha.

Her parents have had to quit their jobs to look after their only daughter, they do not have any means to save her

Kavitha worked as a nurse in a hospital in Karur and her husband Simon worked in a textile shop. Kavitha quit her job after her daughter was diagnosed with cancer. When Varshini had a stroke, Simon also quit his job to look after her. It has been extremely difficult to manage the treatment and the basic needs without an income. They have borrowed 7 lakh from their relatives so far and are already on the verge of exhausting it. They need 15 lakh for the treatment which is beyond their means.

"Whenever our relatives inform us that they are coming to visit my daughter, we ask them to give us the travel expense, that will be more helpful to us. We have sold everything we had, all we have now are a few utensils. We do not have enough money to even get scans done. She is our only daughter, I can't imagine a life without her." - Kavitha.

14-year-old Varshini is battling dreadful cancer. She also suffered a massive stroke that has caused immobility in her hands and legs. She is now bedridden and requires the support of her mother for all her basic activities. Her parents were forced to quit their jobs and they have no means to save her now. Varshini deserves a life and she is desperately waiting to go back home and live her dreams. 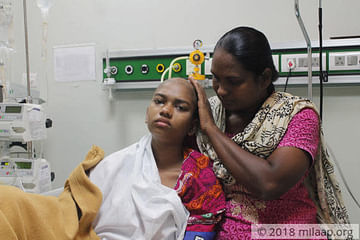