Having Lost The Will To Live, This 28-Year-Old Now Has Some Hope If He Gets A Kidney Transplant Immediately | Milaap
loans added to your basket
Total : 0
Pay Now

SJ
You are sending a message to
Shaefali Jain
Go back

Having Lost The Will To Live, This 28-Year-Old Now Has Some Hope If He Gets A Kidney Transplant Immediately

“Sometimes I get so frustrated because of the way I am, I just feel like dying. My condition hasn’t improved for over 2 years and I just don’t see the point living like this. I am alive just for and because of my wife.” – Umesh

Umesh at the hospital

Not only have both of Umesh’s kidneys failed, but now, he’s also running out of places on his body from which dialysis can be performed. Only a kidney transplant can give him his life back and his father has already been matched as a donor. Unfortunately, after years of struggle, Umesh and his family are left with no resources to help save his life.

Both of Umesh’s kidneys have failed

2 years ago, Umesh and his wife, Aparna were working hard in Mumbai and enjoying their adventure as a couple, who ran away from their village to get married. But, all of a sudden, Umesh’s body parts started swelling up and he just couldn’t stop vomiting.

“His legs were so swollen that he couldn’t even remove his pants. We decided to go to the hospital to get checked. Immediately, we were told that both of his kidneys had failed. We both broke down because we were presented with two options: either lifetime dialysis or transplant if we found a donor. We tried hard for a donor initially but we had to start dialysis instantly.”  - Aparna, Umesh’s wife

28-year-old Umesh has been suffering for 2 years

Umesh has been going to the hospital 2 or 3 times a week, for over 2 years. Apart from the 5-hour long dialysis treatment, the 28-year-old’s life has changed considerably, leaving him extremely depressed.

To add insult to injury, now, Umesh is even running out of places on his body to which the dialysis machine can be attached. After his arms, the doctors are now using the top right portion of his chest as the last option.

“After undergoing dialysis hundreds of times, all my other veins and parts are blocked. Now, the chest is the last option. They say that within 6 months this will get infected and I will not be able to utilize the dialysis machine anymore. I consume 5-6 tablets daily. I get blasting headaches, and my hips and feet hurt a lot. I’m allowed to drink only 1 liter of water in a day. The thing with dialysis is that your condition doesn’t improve. I feel the same as when my kidneys have failed, and because of this, I get very angry and frustrated too. Every time before dialysis, my body is swollen completely. I don’t want to live like this.” – Umesh

Umesh thinks he is ruining his wife’s life too

“He feels so guilty that he’s like this. After marriage, we haven’t even traveled anywhere. He feels that he’s not being a good husband and ruining my life. He keeps saying that he’s being a burden on me, but it’s not true. I know that he will get better after the transplant. Anyone can understand why he gets angry, he was a fit man and would love to play cricket and now he keeps ” – Aparna

Umesh has lost the ability to urinate

Umesh’s life has been nothing but terribly hard over the past 2 years. He suffers from anemia too and until now, he has needed 12 bags of blood since his hemoglobin was dangerously low. He needs help, frequently, to walk straight too. To make things worse, he has not been able to urinate for almost 2 years.

Umesh is running out of time to get a transplant

Fortunately, after months of struggle, Umesh’s father started recovering from his own health problems and has been tested to be a positive match as a donor. Umesh can finally have his life back. Aparna and Umesh can start working again and have the future they dreamed of, together.

Now, since they have exhausted all their resources and borrowed from several places, they are running out of time to arrange funds for the life-saving transplant Umesh needs.

Umesh is in dire need of help

Soon after his kidneys failed, the 28-year-old has been unable to work. He worked as a clerk at a dental clinic and since he has no relatives, besides a brother, in Mumbai, Aparna quit her job to look after him.
Since months, they’re surviving on the money they’ve borrowed from their relatives back in their village.

“Each week I have to take an injection that costs around Rs. 2,500. Apart from that, we have to buy the additional equipment needed for dialysis. There are just so many costs. My brother has helped me out a lot, he’s the one that feeds us and helps us out at home. I’ve asked everyone I could and I even sent messages on What’s App.” – Umesh

To stay alive through dialysis, Umesh and his wife have spent over Rs. 2.5 lakhs, out of which they have borrowed Rs. 2 lakhs from their relatives.

The total cost of the kidney transplant, including follow-ups and medicines is estimated to be around Rs. 10 lakhs, which Umesh can’t afford at all. He is left with no option but crowdfunding.

28-year-old Umesh’s life has turned upside down after both his kidneys failed. He is extremely weak and unable to urinate. His only hope of survival is to get a kidney transplant and his father has been matched as a donor too. But, the transplant is just too expensive for him to afford and he cannot do so without your help.

Your support will save Umesh’s life. 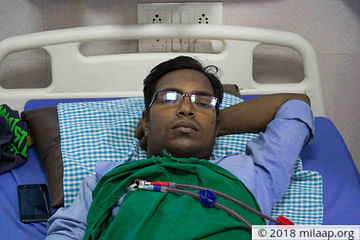 Help Umesh Get A Kidney Transplant

Umesh's kidneys have failed and only a kidney transplant can save him. He is running out of time...