Away From Home,This Mother Struggles To Save Her Son Whose Organs Are Failing | Milaap
loans added to your basket
Total : 0
Pay Now

Away From Home,This Mother Struggles To Save Her Son Whose Organs Are Failing

“When you come into our house, the first thing you’ll see are all the prizes he’s won in school. That’s the Thanmay we know – happy, bright, active… but not anymore. He is angry, irritable and in a lot of pain. And how can he not complain? My son’s liver and kidney are failing rapidly. I can’t blame him when he gets angry with me for not sending him to school, or for keeping him away from his home, his sister… his friends. He’s only a child.” - Bindu, mother

Yes, Thanmay is only a child. A child who is now living on borrowed time. He is only 9 and two of his vital organs are failing. The cure? A kidney and liver transplant at the earliest.

He Googled his condition, now he tells everyone about it

Bindu can’t remember how and when Thanmay found out he is sick. For every talk with the doctor, she always made sure he wasn’t around. But Thanmay knows he’s unwell, infact, he even knows he needs something called a ‘transplant’. He googled it.

“A relative came to visit him the other day and he told them that he needs a transplant to survive. Imagine hearing those words come out from your 9-year-old’s mouth…the fact that he even understands what living and dying means. Is it fair for someone as young as him?”

Thanmay’s suffering began 6 months ago when he had severe pain while urinating. Bindu and Babu soon found out that their son has several stones in his bladder and kidney, his liver too was not functioning properly. It has only been downhill since then.

A glimpse of everything that he has lost

Thanmay’s happy days seem like a distant dream now, but let’s look back at them. A class 4 student, there was nothing he wasn’t good at, no one that didn’t like him. The top of that list was his younger sister who wanted to do everything he did. Thanmay was a regular kid before this disease, hyperoaxaluria, took over his life.

The family can’t be together during these difficult times

Thanmay and Bindu are now in Bangalore for his treatment. He needs dialysis thrice a week. Babu can’t be with his son as much as he wants to. Once a month is all he can afford – he has a job to do to continue his treatment and a younger daughter to take care of.

“It’s tough being away from home and having to deal with all of this on my own. Every other day it’s some test or the other, every day we’re spending more than my husband makes at his job in a private company.”

The family can’t even be together during these difficult times. Bindu wishes her husband was with her right now, and Thanmay wishes he was at home. Thanmay knows he’s sick, and now you do too. But what he doesn’t know is that this disease can kill him. 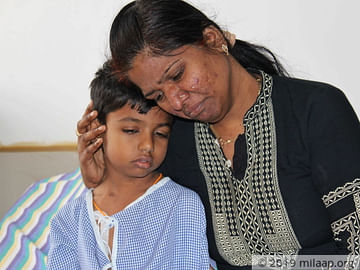 His Is Only 9 And Two Of His Organs Are Failing

Thanmay needs a liver and kidney transplant at the earliest to survive.

UPI: rzpy.givetomlpthanmay0003@hdfcbank (Copy to clipboard)
Or
Click here to read the instructions before you make a bank transfer.